Mumbai: Bomb Scare in BEST Bus Turns Out To Be A Hoax After Bus Conductor Alerts Officials 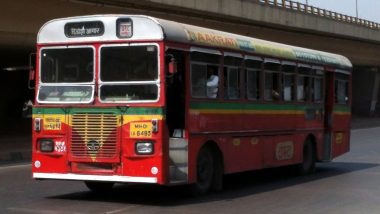 The bomb detection and disposal squad conducted a detailed check of the suspected bag after rushing to the spot.

According to a report in The Times Of India, "Carpenter's tools were found in the bag. The bus was checked thoroughly and there was no bomb found," said a senior BEST official. The vehicle was sent back to the depot. BEST buses have been soft targets of terror attacks in the past.

According to DCP Chaitanya S, Mumbai police spokesperson, a BEST bus conductor came across an unclaimed bag in a bus near NCPA on Wednesday and alerted the police.The bomb detection and disposal squad checked the suspected bag. “No bomb was found”.

Earlier security was tightened in Mumbai on Saturday after a telephone call was received by Bandra railway police station of a possible bomb attack, railway police commissioner Quiser Khalid had said. Bomb Scare Near Antilia: Scorpio With 20 Gelatin Sticks Found Near Mukesh Ambani's Residence in Mumbai

He said the caller, who is staying in Dubai with his mother and is of unsound mind, was contacted and all agencies had been alerted about the situation, adding that there was no need to panic or worry.

(The above story first appeared on LatestLY on Dec 09, 2021 10:39 AM IST. For more news and updates on politics, world, sports, entertainment and lifestyle, log on to our website latestly.com).