"Several celebrities had given their dates, and actors like Parineeti Chopra and Isha Koppikar had even posted their invitations on social media two days ago," a police officer said. 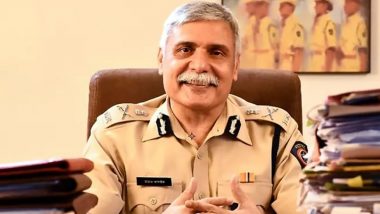 Mumbai, June 25: The ongoing political instability in Maharashtra seems to have taken a toll on one of the biggest events in Mumbai. The Mumbai Police's annual event 'Umang', which was supposed to be held on June 26 at the Jio World Garden in Bandra Kurla Complex, has now been postponed.

According to a report in the Hindustan Times, the event has been postponed but there's no official confirmation on the new date. While the official reason for postponing the event is the spike in COVID-19 cases, sources from the police said that the event has been cancelled due to the crisis in the MVA government. Mumbai Shocker: 45-Year-Old Man Slashes Wife 30 Times With Paper Cutter for Spending Time on Phone in Dahisar, Arrested.

Taking to Twitter, police commissioner Sanjay Pandey said, "Taking into consideration the recent spike in Covid-19 cases, we have decided to postpone Umang. The new date will be announced soon. I am thankful to the police constables and officers who participated in the event rehearsal."

The Mumbai police commissioner is set to retire on June 30. However, a senior IPS office said, "The chief minister and other cabinet ministers generally attend the event. But none of the political leaders could have attended the programme this year given the political developments. Now the police are also on alert, as there is likelihood of a law-and-order situation."

Umang is the annual charity event of Mumbai Police that is organised every year for the police force and their families. The event is a star-studded affair and is graced by Bollywood celebrities, entrepreneurs, and social and political workers among others. For the last two years, Umang was cancelled due to the COVID-19 pandemic. Maharashtra Political Crisis Live Updates: Deputy Speaker Issues Disqualification Notice to 16 Rebel MLAs; CM Uddhav Thackeray Says, 'No One Should Use Balasaheb Thackeray's Name'.

"The programme had not been organised in the last two years because of the pandemic and we were hopeful that it would happen this year on June 26. Several celebrities had given their dates, and actors like Parineeti Chopra and Isha Koppikar had even posted their invitations on social media two days ago," a police officer said.

Several Bollywood celebs such as Shah Rukh Khan, Salman Khan, Hrithik Roshan, Kapil Sharma, Kartik Aaryan, Priyanka Chopra, Anil Kapoor, and Rani Mukherjee among others have attended the charity event in the past. It must be noted that the Mumbai Police earn about Rs 4 crore from the annual charity event. Karnataka Hospitals Sealed After 7 Foetuses Packed in Boxes, Found Floating in Gutter.

While the money is used for the welfare of the police, they also spend around Rs 28 lakh on the programme and Rs 5 lakh on transportation arrangements for police personnel.

(The above story first appeared on LatestLY on Jun 25, 2022 05:05 PM IST. For more news and updates on politics, world, sports, entertainment and lifestyle, log on to our website latestly.com).