The incident was reported in Gajanan Market, where trader Ashwin Sakhare, who owns the well-established 'Rang Creation', decided to sell sarees at Rs 10 per piece, incurring a Rs 80 loss on each one of them. 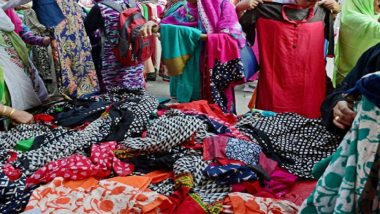 Mumbai, June 9: A unique sale offering saree for Rs 10 each was stopped by the police in Ulhasnagar as it created ruckus in the region, leading to fears of law and order violation. The disappointed customers, who had swelled outside the shop, were asked to return empty handed after the police ordered the shopkeeper to close his outlet.

The incident was reported in Gajanan Market, where trader Ashwin Sakhare, who owns the well-established 'Rang Creation', decided to sell sarees at Rs 10 per piece, incurring a Rs 80 loss on each one of them. Anti-Rape Sarees: Website Creates Super Sanskari Sarees to Highlight Victim Shaming

Explaining the rationale behind his sale offer, Sakhare said his move is not aimed at maximising business but to practice social welfare. He told reporters that after making profit round the year, he decides to incur loss for a few days as it allows those from the economically weaker sections to address their apparel requirements.

The sale began on Wednesday and continued till Saturday -- when the police decided to halt it after the shop drew an unprecedented crowd.

Since early Saturday, a huge gathering was seen outside Sakhare's shop. He asked the customers to queue up in order to avoid congestion.

Fearing that the crowd would spiral out of control, the police asked Sakhare to call off his sale. Despite repeated announcements from him, the crowd did not budge. This forced the police to direct him to shut down the shop for the day.

In the four-day sale period, Sakhare said, he ended up selling around 2,000 sarees at Rs 10 each. The cost price of these sarees were Rs 90, he claimed.

(The above story first appeared on LatestLY on Jun 09, 2019 04:40 PM IST. For more news and updates on politics, world, sports, entertainment and lifestyle, log on to our website latestly.com).