The Shiv Sena leader said that the civic body has so far completed 78 percent of nullah desilting work, while the remaining work will be finished within the deadline 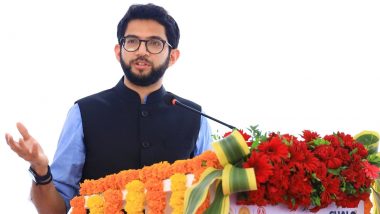 According to a report in the Indian Express, the statements came after the Maharashtra cabinet minister held a review meeting on pre-monsoon preparations in the city. On Thursday, Thackeray discussed issues such as road repairs, tree trimming, and nullah cleaning among others. Fuel Price Cut: Maharashtra Govt Should Also Reduce Excise Duty on Petrol, Diesel, Says BJP Leader Devendra Fadnavis.

"We are prepared for the monsoon but the city may face extreme rainfall and flash floods. If it rains more than 200mm in an hour, then the city will face water logging. However, our nullah desilting work is going well and in case of floods, receding of rainwater will be quicker. The BMC will also station more than 480 pumping stations at flooding spots." Thackeray said.

Reviewed the pre-monsoon preparedness with BMC Administrator Iqbal Singh Chahal ji, AMCs, DMCs, Asst.Commissioners and other officials. The work on various preventative measures is on track and @mybmc is geared up to ensure safe a monsoons ahead. https://t.co/FiMGNeMjBf

While speaking to media persons at the Brihanmumbai Municipal Corporation (BMC) headquarters, Thackeray further added, "The BMC has addressed about 90% of flooding spots in the city. Now, I have also instructed ward officers to visit their respective areas to keep check on new flooding spots."

According to sources, the country's richest civic body had identified 380 flooding spots in the city. The Tourism Minister said that the civic body has so far completed 78 percent of nullah desilting work, while the remaining work will be finished within the deadline. Mumbai Rains 2022: City's Water Stock To Last for at Least Three Months Even if Monsoon Gets Delayed.

When questioned about nullah cleaning not being carried out in two shifts at some locations, the Sena leader said that the BMC wasn't able to carry out desilting work in two shifts as there are people living along the nullah.

"We have been taking a review meeting with all agencies for pre-monsoon works. There is a lot of infrastructure work going on in the city so coordination will help in tackling the challenges," Thackeray added.

Talking about people residing in landslide-prone areas, the state minister said, "We have disbursed fund of Rs 62 crore for landslide mitigation work. The only solution to such an unfortunate incident is to relocate the people living in these landslide-prone areas. However, it will take some time as there is a shortage of housing units. In the next three years, we are going to create 30,000 housing units for PAP (project affected people)." Online Fraud in Mumbai: 52-Year-Old Civil Engineer Duped of Rs 9 Lakh With Lure of Job Offer in UK.

Responding to the opposition, particularly the BJP's allegation of shoddy nullah cleaning work, Thackeray said that he will not reply to criticism from the BJP but accept their suggestions. "If they have any constructive suggestions, we will definitely incorporate them," he said.

(The above story first appeared on LatestLY on May 21, 2022 10:18 PM IST. For more news and updates on politics, world, sports, entertainment and lifestyle, log on to our website latestly.com).