Flights to and from Mumbai's Chhatrapati Shivaji Maharaj International Airport were delayed by 35 minutes owing to heavy rain and low visibility, said an official. 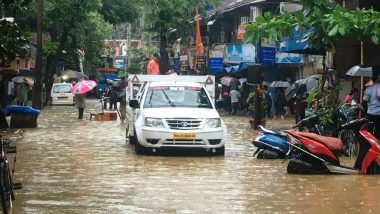 A view of the water-logged Matunga Market after heavy rains in Mumbai. (Photo Credits: IANS)

Mumbai, July 1: A person was electrocuted as rain pounded Mumbai and its surroundings for the fourth consecutive day, disrupting normal life and hitting air, road and rail traffic, officials said on Monday. A 30-year-old man, Mohammed Ayub Kazi, was electrocuted inside his home in Shivajinagar, Govandi suburb in north-east Mumbai. He was rushed to the Rajawadi Hospital where he was declared dead. Catch Live Updates of Mumbai Rains Here.

Overnight heavy spells of rain inundated several areas in the city including Dadar, Sion, Matunga, Parel, Wadala and virtually halted all traffic movement, leading to huge traffic snarls across the city since daybreak. Flights to and from Mumbai's Chhatrapati Shivaji Maharaj International Airport were delayed by 35 minutes owing to heavy rain and low visibility, said an official.

Long-distance services on the Central Railway's Mumbai-Pune sector were hit following the derailment of at least four wagons of a goods train between Jambrung and Thakurwadi in the Monkey Hill section of the Western Ghats early on Monday.

Several Mumbai-Pune trains were cancelled, some diverted and other long-distance trains hit at various locations en route as the CR made frantic efforts to restore normalcy. Railway tracks were flooded at locations like Sion, Matunga and Kurla, impacting the CR's suburban sector with trains running behind schedule, delaying lakhs of office-goers and students.

Restoration was taken up on a war-footing and services were restored at 11 a.m., said a WR official. Road traffic took the brunt of the heavy rain with water-logging in several areas of the city, eastern and western suburbs, though a majority of the subways escaped flooding as the BrihanMumbai Municipal Corporation activated pumps to throw out the gushing rain water.

As children were stranded in the rain, several schools in and around central Mumbai declared a holiday for the day as a precautionary measure. The IMD has forecast heavy to very heavy spells in and around Mumbai on Monday, with rainy conditions likely to continue for the next four days, and temperatures at a maximum of 28 degrees and 23 degrees.

(The above story first appeared on LatestLY on Jul 01, 2019 03:31 PM IST. For more news and updates on politics, world, sports, entertainment and lifestyle, log on to our website latestly.com).