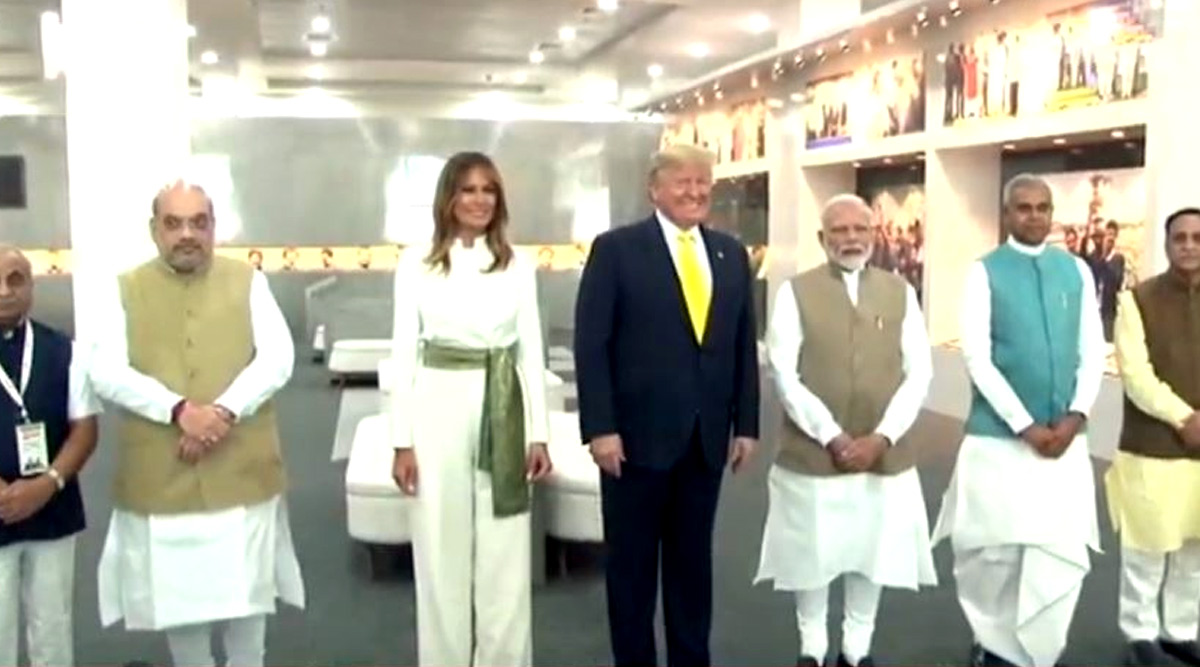 Ahmedabad, February 24: United States President Donald Trump, First Lady Melania Trump and a high-level delegation, which includes their daughter Ivanka and son-in-law Jared Kushner, have arrived in India today. From inaugurating Motera Stadium in Gujarat's Ahmedabad to a visiting the glorious Taj Mahal in Agra, Trump has a packed two-day schedule in India. He will be delivering a joint address with Indian Prime Minister Narendra Modi at the Namaste Trump event at Motera Stadium. Viewers can watch the live streaming of the event online on the YouTube channel of Doordarshan News. What's on The Menu? US President, First Lady Melania to Relish Gujarati Vegetarian Dishes in Ahmedabad, 'Trump Platter' Awaits First Couple at Delhi's Bukhara Restaurant.

The meeting of 45th US President with Prime Minister Modi is a much-awaited global diplomatic event in 2020. On reaching India, Trump and Melania will be visiting Sabarmati Ashram. After that, there will be a grand roadshow leading to the newly-built Sardar Vallabhbhai Patel Stadium. PM Modi and Trump will inaugurate Motera stadium- the world’s largest cricket stadium. At the stadium, the 'Namaste Trump' event will be held where the two leaders will be jointly addressing a gathering of over one lakh at 1.05 pm. Full Schedule of US President And First Lady's First Official Trip to India.

Before Trump's touchdown, PM Modi said that India is waiting for the arrival of President Trump. “India awaits your arrival @POTUS @realDonaldTrump! Your visit is definitely going to further strengthen the friendship between our nations. See you very soon in Ahmedabad,” PM Modi said on Twitter.

Notably, this is the first visit of Trump to India after becoming President. India has made extensive arrangements to showcase the chemistry between the Indian premier and the US President. Lakhs of people are expected to line-up the streets to Ahmedabad to greet POTUS during their roadshow.