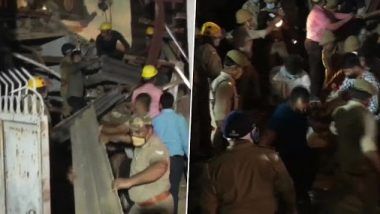 Noida, July 31: At least two people have died while three are in critical condition after a portion of a multi-storey under-construction building collapsed in Uttar Pradesh's Noida on Friday. The rescued ones were trapped in the debris, police said. The incident was reported from Sector 11 around 7.30 pm. As soon as the incident was reported National Disaster Response Force (NDRF) team rushed to building collapse site.

Earlier, Suhas Lalinakere Yathiraj, District Magistrate Gautam Buddh Nagar had said that five people were rescued of which 2 were in critical condition. All of them were rushed to the nearby hospital. Police personnel in large number, along with senior officers and teams of the Fire Department and the National Disaster Response Force (NDRF), were present at spot for rescue operation.  Mumbai Building Collapse Update: Death Toll Rises to 6 as Rescue Operation Underway at Bhanushali Building Collapse Site in Fort.

#UPDATE: 2 people have succumbed to their injuries. Three people are stable and are undergoing treatment: Noida Police on building collapse in Sector-11

(The above story first appeared on LatestLY on Jul 31, 2020 10:41 PM IST. For more news and updates on politics, world, sports, entertainment and lifestyle, log on to our website latestly.com).