NRC Slip Up: How Final List And Data Related to Assam National Register of Citizens Disappeared From nrcassam.nic.in

Days after the Assam National Register of Citizens (NRC) data went offline, it has emerged that an official did not hand over the password of two official email IDs to concerned authorities which reportedly led to the disappearance of data. 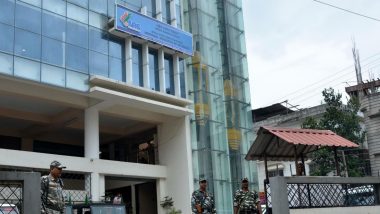 Guwahati, February 15: Days after the Assam National Register of Citizens (NRC) data went offline, it has emerged that an official did not hand over the password of two official email IDs to concerned authorities which reportedly led to the disappearance of data from official website nrcassam.nic.in. The official, former NRC project manager Ajupi Baruah, quit her job in November last year soon after her former boss Prateek Hajela had been transferred to Madhya Pradesh in November.

According to reports, an FIR has been registered against Ajupi Baruah for not "surrendering" the password before quitting her job. Since no other official had access to the password, nobody could access the cloud server that was provided by Wipro. "We have filed (FIR) against an NRC officer on Wednesday for not providing the password to the data records system. She quit without handing over the password, because of which no authorised official is being able to access any data," a source told TOI. Like Aadhaar Data, Secure Assam NRC Data: Supreme Court.

Baruah, however, has a different story to tell. She said that it was "mutually agreed" to share the password in person with NRC Executive Director Chandana Mahanta who lodged a complaint against her. "It is not a protocol to give password over phone. When I received a letter on February 7, 2020, asking me for the password to my Gmail account, I informed her (Chandana Mahanta) over the phone that I would be away for a few days, and would meet her in person on February 17 to hand over the password. She had agreed to it then," Baruah was quoted as saying.

It raises the question of why such sensitive information related to citizens and NRC was linked to someone's personal email ID. According to Baruah, the official email account under nic.in was deactivated almost two years ago. Another reason that led to the disappearance of the NRC data is non-renewal of the contract with Wipro. After Prateek Hajela's transfer to Madhya Pradesh, on the Supreme Court's orders, there was no coordinator. The contract with Wipro ended on October 19 last year.

In a statement, Wipro said, "The IT Services Contract was not renewed by the authorities upon its expiry in October 2019. However, as a gesture of goodwill, Wipro continued to pay the hosting service fee until January-end 2020." All these development have raised serious questions over the government's handling of the NRC data. Questions such as why a private company's server was used to store citizens' information and why not official email accounts were used to access data are being asked.

The final list of Indian citizens residing in Assam was uploaded on its official website 'www.nrcassam.nic.in' on August 31, 2019, after the NRC exercise. The disappearance of data has resulted in panic, especially amongst the people who have been excluded from the NRC list as the rejection certificates were yet to be issued. The final NRC excluded 19,06,657 persons. A total of 3,11,21,004 names were included out of 3,30,27,661 applicants.

(The above story first appeared on LatestLY on Feb 15, 2020 09:46 AM IST. For more news and updates on politics, world, sports, entertainment and lifestyle, log on to our website latestly.com).