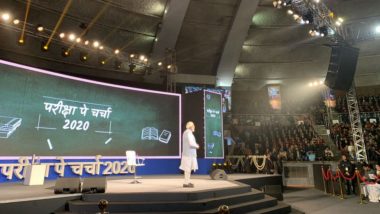 New Delhi, January 20: Prime Minister Narendra Modi on Monday held the third edition of his 'Pariksha Pe Charcha 2020' event and had a long interaction with students regarding exam preparation and stress. During the programme, PM Narendra Modi responded to the queries posed by students. During the interaction, PM Modi gave tips to tackle exam stress and expressed his views on what success means. 19 Students from Haryana to Participate in 'Parisksha Pe Charcha'.

One of the questions posed by a student at the 'Pariksha Pe Charcha 2020' was about mood off during or being demotivated during exam preparation. In his response, PM Modi said that motivation and demotivation are very common in life. He cited the example of Chandrayaan 2 mission. "Everyone was awake as if they had participated in the mission. But when things went wrong, we were disappointed," he said. Rahul Gandhi Dares Narendra Modi to Debate With University Students, Explain 'Why Indian Economy Has Become a Disaster'.

PM Modi then recalled what happened during the India-Australia test series in 2001 to make a point that failures are a part of life. "Do you remember the India-Australia test series in 2001? Our cricket team was facing setbacks. The mood was not very good. But, in those moments can we ever forget what Rahul Dravid and VVS Laxman281 did. They turned the match around," he said. "A temporary setback doesn’t mean success is not waiting," he added.

Three students asked PM Modi on the importance of extra-curricular activities along with studies. The Prime Minister said that not pursuing a co-curricular activity can make a person like a robot, adding that time management plays an important role. "What is not good is when the passion of the children becomes fashion statements for parents. Extra-curricular activities needn’t be glamour driven. Let each child pursue what he or she likes," he further advised parents.

(The above story first appeared on LatestLY on Jan 20, 2020 12:06 PM IST. For more news and updates on politics, world, sports, entertainment and lifestyle, log on to our website latestly.com).