Pro-Khalistani people allegedly supported by Inter-Services Intelligence (ISI) attacked a number of British Indians who were standing outside the Indian High Commission in London on March 9. 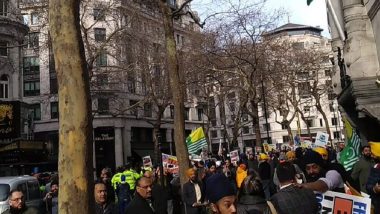 Members of groups such as the Overseas Pakistanis Welfare Council (OPWC) and Sikhs for Justice (SJI) clashed with Indian supporters. However, no injuries were reported in the clashes. Recently, in Abohar town of Punjab, some miscreants painted "Khalistan Zindabad" and "Referendum 2020" on the walls of the town, reported Business Standard. Locals informed the police immediately about the incident. Pro-Khalistani organisation, SJI is believed to be behind the entire episode. Pro-Khalistan Leader Sukhminder Singh Hansara Lauds Pakistan PM Imran Khan, Army Chief For Opening Kartarpur Corridor.

Earlier in February this year, Pakistani and some Pro-Khalistan Sikhs protested outside their consulate offices in Chicago, the United States after the Pulwama attack, reported The Asian Times. The protesters raised Pro-Pakistan Slogans. However, people of the Indian community living in the US also burnt Pakistani Flag. Similar protests were reported from other parts of the country. Strict security measures were observed by the local police to avoid any untoward situation.

(The above story first appeared on LatestLY on Mar 10, 2019 09:11 AM IST. For more news and updates on politics, world, sports, entertainment and lifestyle, log on to our website latestly.com).