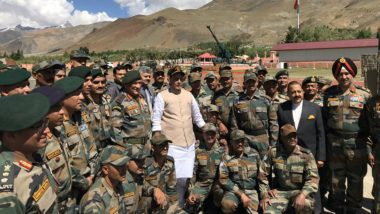 New Delhi, July 15: Defence Minister Rajnath Singh and Indian Army chief General MM Naravane would visit the frontier region of Ladakh on July 17. Their visit comes amid the ten-week long ongoing border dispute between India and China. They are expected to hold talks with senior Army officers deployed in the region. PM Narendra Modi in Ladakh: Age of Expansionism is Over, This is the Age of Development.

Singh, according to reports, would be meeting the soldiers injured in the physical clasesh with Chinese counterparts in Galwan Valley on June 15. The face-off had claimed the lives of 20 Indian soldiers and left at least 76 injured. China's PLA had also sustained casualties but the numbers were not released.

The Defence Minister was earlier scheduled to visit Ladakh on July 3. But the visit was deferred, and instead, Prime Minister Narendra Modi reached the Nimoo region of Leh and addressed the soldiers. He had also visited the medical facility in Leh where jawans injured in the Galwan clash are being treated.

The status quo in eastern Ladakh sector was altered in the first week of May, after the Chinese forces exceeded their area of patrolling. They subsequently made incursions in Pangong Tso, Galwan Valley and Depsang regions.

Both countries used diplomatic and military channels to resolve the dispute. A virtual meeting held between India's National Security Advisor (NSA) Ajit Doval and China's State Councillor Wang Yi was followed by the first major disengagement on the ground.

The Chinese forces, according to reports, are gradually retracting from the points where they had entered into after May. The Indian side has reiterated that the status quo ante should be restored at the earliest.

(The above story first appeared on LatestLY on Jul 15, 2020 03:52 PM IST. For more news and updates on politics, world, sports, entertainment and lifestyle, log on to our website latestly.com).