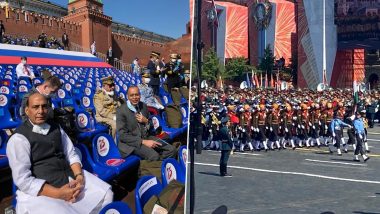 "Attending the Victory Day Parade at Red Square in Moscow today to commemorate the 75th Anniversary of Victory of the Soviet People in the great Patriotic War of 1941-1945," Singh said on Twitter, as he also shared the images of Indian contingent marching in the parade.

"I am proud that a Tri-Service contingent of the Indian Armed Forces is also participating in this parade," he said, calling it an "extremely proud and happy moment" for India.

Impressive turnout of the Tri-Service contingent of the Indian Armed Forces at the Victory Day Parade in Moscow is indeed an extremely proud and happy moment for me. pic.twitter.com/csEKNGKFLU

#WATCH Russia: A Tri-Service contingent of Indian Armed Forces participates in the Victory Parade at Red Square in Moscow, that marks the 75th anniversary of Russia's victory in the 1941-1945 Great Patriotic War. pic.twitter.com/jamcyb6C9m

Singh was invited as an esteemed guest at the parade which was attended by the entire top brass of Russian establishment including President Vladimir Putin. The Indian Defence Minister was received at the Red Square by his Russian counterpart Sergey Shoygu.

China's Defence Minister General Cao Gangchuan also attended the event in Moscow, and speculations were rife in the Chinese media that Singh could hold brief discussions with him on the border dispute. The Indian government, however, dismissed the speculations stating that no such meeting is on the cards.

Russia: Troops of Chinese Army participate in the Victory Parade at Red Square in Moscow, that marks the 75th anniversary of Russia's victory in the 1941-1945 Great Patriotic War. pic.twitter.com/zXxwUtf8e1

A day before the Victory Parade, Russian Foreign Minister Sergey Lavrov, in a trilateral conversation with his Indian and Chinese counterparts, pitched for peace between the two sides. Lavrov called for de-escalation at the border in Ladakh, adding that the two sides should resolve all pending disputes using dialogue.

Lavrov, however, ruled out a diplomatic intervention by Russia. "I don’t think that India and China need any help from the outside. I don’t think they need to be helped, especially when it comes to country issues. They can solve them on their own, it means the recent events," he was reported as saying.

(The above story first appeared on LatestLY on Jun 24, 2020 01:55 PM IST. For more news and updates on politics, world, sports, entertainment and lifestyle, log on to our website latestly.com).