Rajya Sabha Elections 2022: EC Announces Dates, Polls to 57 Rajya Sabha Seats To Be Held on June 10 and Results To Be Declared on Same Day

The biennial poll for 57 Rajya Sabha seats will be held on June 10 and the counting of votes will be done on the same day, the Election Commission announced on Thursday. 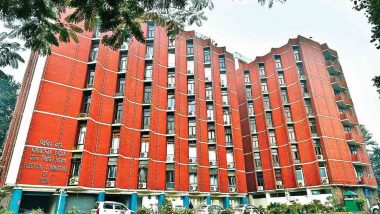 New Delhi, May 12: The biennial poll for 57 Rajya Sabha seats will be held on June 10 and the counting of votes will be done on the same day, the Election Commission announced on Thursday.

It said that the notification will be issued on May 27, last date for nomination is May 31, scrutiny will be held on June 1, polling is on June 10 from 9 a.m. to 4 p.m. and the counting of votes will begin at 5 p.m. on the same day. Rajya Sabha Elections 2022: Polls on 57 Seats Across 11 States on June 10, Says Election Commission.

The term of office of 57 Rajya Sabha members elected from 15 states is due to expire from June to August. These comprise 11 from Uttar Pradesh, six each from Maharashtra and Tamil Nadu, five from Bihar, four each from Andhra Pradesh, Karnataka, and Rajasthan, three each from Madhya Pradesh and Odisha, two each from Telangana, Chhattisgarh, Punjab, Jharkhand, and Haryana, and one from Uttarakhand.

The Commission also said that Broad Guidelines of Covid-19 issued by it to be followed, wherever applicable, during the entire election process by all persons. The Chief Secretaries of all 15 states have been directed to depute a senior officer to ensure that the extant instructions regarding Covid-19 containment measures are complied with while making arrangements for conducting the election, the poll panel added.

(The above story first appeared on LatestLY on May 12, 2022 05:33 PM IST. For more news and updates on politics, world, sports, entertainment and lifestyle, log on to our website latestly.com).