Rakesh Maria, former Police Commissioner of Mumbai, has made startling revealations about the 26/11 terror attack in his autobiography 'Let Me Say It Now'. 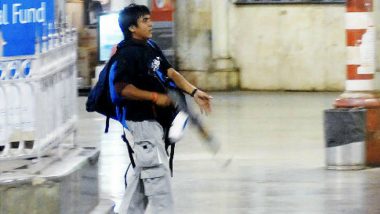 Mumbai, February 18: Rakesh Maria, former Police Commissioner of Mumbai, has made startling revealations about the 26/11 terror attack in his autobiography 'Let Me Say It Now'. Rakesh Maria, in his book, revealed how brainwashed terrorist Ajmal Amir Kasab was and shed light on terror out Lashkar-e-Taiba's (LeT) sinister plan behind the 26/11 Mumbai attacks. Maria said that Ajmal Kasab actually believed Muslims were not allowed to perform namaz in India. Rakesh Maria Autobiography 'Let Me Say It Now' Spills The Beans on Sheena Bora Murder And Ajmal Kasab-Dawood Ibrahim Link.

Maria, who investigated the 26/11 Mumbai terror attack and interrogated Ajmal Kasab, revealed that the slain terrorist used to think mosques were locked up in India. "Kasab seriously believed that Muslims were not allowed to offer namaaz in India, and mosques were locked up by the authorities. He felt that the azaan (Islamic call for namaz) he heard five times a day in the crime branch lockup was just a figment of his imagination," the former top cop wrote in his book. Sheena Bora Murder Case: Rakesh Maria Interfered in Investigation, Says Indrani Mukerjea's Lawyer.

"When we came to know of this, I instructed Mahale (investigating officer Ramesh Mahale) to take him to the mosque near the metro cinema in a vehicle," Maria further stated. "The officer said that Kasab was bewildered when he saw the namaz in progress," he added. The autobiography by Maria also revealed that LeT had wanted to project 26/11 Mumbai attacks as a case of "Hindu terrorism". Fake IDs with Hindu names were given to terrorists, including Ajmal Kasab.

Kasab was carrying a fake ID that showed him as Samir Dinesh Chaudhari from Bengaluru. "There would have been screaming headlines on newspapers claiming how Hindu terrorists had attacked Mumbai. Over the top TV journalists would have made a beeline for Bengaluru to interview his family and neighbours. But alas, it had not worked that way and here he was, Ajmal Amir Kasab of Faridkot in Pakistan," Maria wrote.

(The above story first appeared on LatestLY on Feb 18, 2020 01:51 PM IST. For more news and updates on politics, world, sports, entertainment and lifestyle, log on to our website latestly.com).