Fadnavis condemned the MSRTC staffers' protest outside NCP chief Sharad Pawar's home on April 8 but also attacked leaders from some parties for blaming the BJP for the incident. 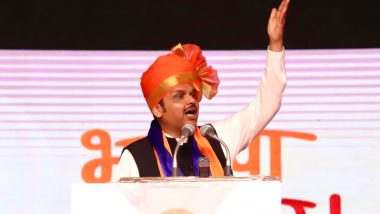 Pune, April 10: The ruling Shiv Sena has become "pseudo-secular" as a worker from that party has printed a calendar in Urdu in which founder Bal Thackeray is addressed as "janab", Maharashtra BJP leader Devendra Fadnavis said on Sunday.

"The Shiv Sena has become pseudo-secular. However, we are not against any religion or their beliefs," the former chief minister claimed.

Fadnavis condemned the MSRTC staffers' protest outside NCP chief Sharad Pawar's home on April 8 but also attacked leaders from some parties for blaming the BJP for the incident.

"Every party has brainless people who make some or the other statement. The BJP will attack from the front, not in this manner, if at all it has to. Since the media knew about the attack and not the police, some ruling parties are trying to divert attention by blaming the BJP," Fadnavis said.

He said the BJP would win the Kolhapur North bypoll as the party was banking on its chemistry with people rather than poll arithmetic.

He also accused the MVA of "terrorising" people in north Maharashtra and wondered if this area had become like West Bengal, a state that has, of late, seen many incidents of political violence, including several people being burnt to death in Birbhum there.

The former CM hailed wrestler and Kolhapur-resident Prithviraj Patil for winning the 'Maharashtra Kesari' tournament and said his party will provide Rs 5 lakh for the latter's training.