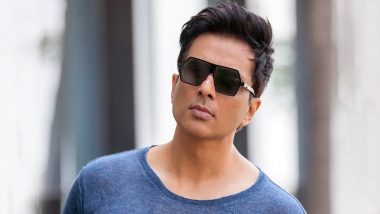 Mumbai, July 27: Actor Sonu Sood, who won the hearts of scores of Indians with his strenuous efforts to facilitate the return of migrants to their native states after imposition of lockdown, is now a "new mission". The Bollywood personality is attempting to repatriate Indian students who are stranded in Georgia amid the COVID-19 pandemic.

Sood was reached out on Twitter by an internet user, claiming that her brother is among the 50 Indian students who are stranded in Tbilisi, the capital of Georgia, amid the pandemic. Replying to her tweet, Sood wrote "New Mission", and added "on it". Sonu Sood Says 'Let Them Study', Provides Tractors to Girls Seen Ploughing Andhra Field in a Viral Video.

"There are around 50 plus students in Georgia tblisi who wants to come back to India from tblisi. Please help @SonuSood.I have been tweeting all day and night.Please bring my brother back. our grand father has expired, family is in huge depression (sic)," wrote a Twitter user Diksha.

Sood, during the peak migrant crisis in April-May, arranged dozens of buses and paid for the train tickets of hundreds of labourers who wanted to leave Mumbai and return to their native villages in wake of the lockdown.

The actor also won praise on Sunday, after he gifted a tractor to a farmers' family in Andhra Pradesh's Chittoor. His act of charity came after taking cognisance of a viral video in which two girls of the family could be seen ploughing the farm manually.

"Spoke with Sonu Sood ji applauded him for his inspiring effort to send a tractor to Nageswara Rao’s family in Chittoor District. Moved by the plight of the family, I have decided to take care of the education of the two daughters and help them pursue their dreams," former Andhra Pradesh CM Chandrababu Naidu said.

(The above story first appeared on LatestLY on Jul 27, 2020 04:03 PM IST. For more news and updates on politics, world, sports, entertainment and lifestyle, log on to our website latestly.com).