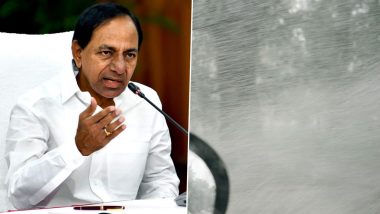 Hyderabad, October 11: Heavy rainfall in next two days may cause floods, Telangana Chief Minister K Chandrasekhar Rao said on Sunday, instructing residents and authorities to stay high alert. According to the Chief Minister's Office (CMO), KCR, as the CM is popularly known, conveyed to people of Telangana that the state is likely to witness heavy to very heavy rains on Monday (October 12) and Tuesday (October 13). Parts of Hyderabad Witness Waterlogging Due to Heavy Rainfall.

"The Chief Minister has asked people in the state to be alert as there is a likelihood of heavy-to-very heavy rains lashing the state in next 2 days. Heavy rainfall reported from several places in the state on Sunday. IMD also predicted heavy to very heavy rains on Monday and Tuesday," the CMO said. Authorities across Telangana have been told to be vigilant as heavy rains could cause floods in parts of the state. Telangana Cop Risks Life, Rescues Dog Stuck In Bushes After Heavy Rains; Netizens Praise The Brave Official As The Video Goes Viral.

"The Chief Minister has instructed Chief Secretary Somesh Kumar to keep the entire official machinery on high alert. The CM also asked the people to be alert as the heavy rainfall may cause floods," the CMO added. According to the IMD centre in Hyderabad, thunderstorms accompanied with lightning will hit isolated places and heavy to very heavy rain may occur at isolated places over Telangana on Monday, and similar conditions to prevail in the state till Wednesday.

Heavy rain very likely to occur at isolated places in Adilabad, Khammam, Nirmal, Mancherial, Jagtial , Peddapalli, Jayashankar Bhupalpally, Mulugu, Karimnagar, Warangal urban and rural Mahabubabad, Bhadrachalam and Suryapet. As per the Indian Meteriological Department (IMD), intensification of a low pressure area over the East-central Bay of Bengal and adjoining north Andaman sea was one of the reasons for the rains.

(The above story first appeared on LatestLY on Oct 11, 2020 04:47 PM IST. For more news and updates on politics, world, sports, entertainment and lifestyle, log on to our website latestly.com).