Tractor Rally on January 26 Against Farm Laws: From Routes, Estimated Tractors on Road to Security Arrangements, Here's All About the Mega Rally on Republic Day 2021

The tractor rally will take place on January 26. Delhi Police on Sunday gave permission to the protesting farmers to hold the protests. Police, however, clearly mentioned that "They can enter Delhi for few kilometres and then exit. 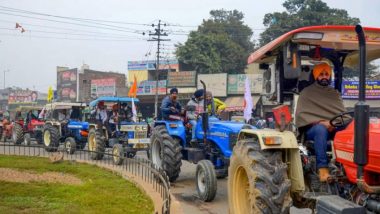 New Delhi, January 25: The tractor rally will take place on January 26. Delhi Police on Sunday gave permission to the protesting farmers to hold the protests. Police, however, clearly mentioned that "They can enter Delhi for few kilometres and then exit (at designation spots)."

The leaders of the farmer organisations have appealed to bring their tractors inside Delhi and not trolleys. 300 Twitter Handles From Pakistan Created to Disrupt & Hijack Tractor Rally by Farmers on Republic Day 2021, Claim Delhi Police.

Here's all about the tractor rally:

Kulwant Singh Sandhu, general secretary of the Punjab Jamhoori Kisan Sabha, was quoted saying, "Around 2.5-3 lakh tractors will take to the roads near the protest sites. The parade will be absolutely peaceful from our end."

The Delhi Police has approved total routes spanning up to about 170 km, of which over 100 km will fall in Delhi. The tractor rally will enter Delhi from Tikri, Singhu and Ghazipur borders. From Singhu, it will pass through Kanjhawala, Bawana, Auchandi border, KMP Expressway and then return to Singhu.

From Tikri border, it will go to Nagloi and pass through Najafgarh and Western Peripheral Expressway. From Ghazipur border, the rally will go to 56-foot road and return to its originating point passing through Kundli-Ghaziabad-Palwal Expressway.

Strict security arrangements have been made. From the farmers' unions side, it has been clarified that only five people will be allowed on a tractor. Delhi Police recently informed that over 300 Twitter handles were generated from Pakistan during January 13 to 18 to disrupt the tractor rally by farmers only by misleading people. The Twitter handles originating from Pakistan have been reportedly pushing hashtags linked to the farmers' protest and the tractor rally.

The farmers have been protesting on different borders of Delhi since November 26, 2020, against the three farm laws. There has been no agreement between the Centre and the protesting farmers despite eleven rounds of talks between them. The agitating farmers demand complete withdrawal of the laws and legal guarantee for MSP. The Centre has offered to suspend the laws for up to 18 months at a meeting with farm unions on 20 January.

(The above story first appeared on LatestLY on Jan 25, 2021 10:08 AM IST. For more news and updates on politics, world, sports, entertainment and lifestyle, log on to our website latestly.com).