Union Budget 2021: ITDC To Serve Food Cooked by Ashok Hotel Chefs to MPs and Others in Parliament During Budget Session 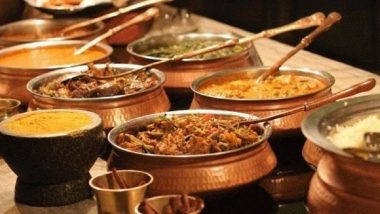 New Delhi, January 27: Taking over the reins of the parliament canteen and ending the 52-year legacy of Northern Railways, the ITDC will serve food cooked by expert chefs of the five-star Ashok Hotel to the MPs and others from the upcoming Budget Session.

There is another menu named 'A la carte' in which there is a list of 13 items comprising six kinds of snacks for morning and evening, and seven kinds of meals with a veg thali and a mini thali.

The Northern Railways handed over the responsibility for the canteen to the India Tourism Development Corporation (ITDC) on November 15. The ITDC is the government's tourism arm which runs the luxury five-star Ashok Group of hotels. It ended the 52-year monopoly of serving food to the Parliamentarians by Northern Railways which had been running the canteen since 1968.

The operations of the catering units in Parliament House Estate (Parliament House, Parliament House Annexe and Parliament Library Building and outside PHE providing services to dignitaries has been taken over by the ITDC since November 15 last year. This will be the first session of Parliament when ITDC will serve food cooked by its expert chefs in the Ashok Hotel.

The Budget Session will commence with the President's Address on January 29 while the Union Budget will be presented on February 1. The session will conclude on April 8 with a recess in between from February 15 to March 8. The Rajya Sabha will sit from 9 a.m. to 2 p.m. and the Lok Sabha from 4 p.m. to 9 p.m. Zero Hour and Question Hour will also be thre.

The process to find a new vendor began in 2019 and in July last year, Lok Sabha Speaker Om Birla met Tourism Minister Prahlad Patel and officials of the ITDC to discuss the issue. Union Budget 2021: Here is What People Expect from the Health Budget Amid Global COVID-19 Outbreak.

Officials at ITDC said they have been instructed to keep special focus on the quality of food which should suit both the common people as well as the dignitaries. At present, the canteen serves around 5,000 people during every session. It has a total of 48 food items on its menu for lunch and evening snacks.

While matters related to the catering arrangements in the Parliament House Complex are typically decided by a joint committee on food management, in the 17th Lok Sabha, however, the food committee has not been constituted.

The final decision was taken by Speaker Birla, who has taken personal interest in ensuring that better quality food is served in the canteen. All the subsidies in the Parliament canteen have been ended from this session, saving approximately Rs 17 crore to Parliament.

(The above story first appeared on LatestLY on Jan 27, 2021 10:27 PM IST. For more news and updates on politics, world, sports, entertainment and lifestyle, log on to our website latestly.com).