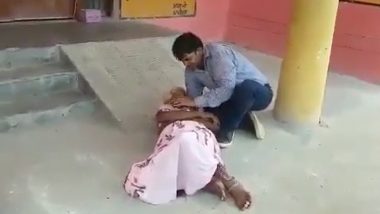 Hardoi, July 4: In a shocking incident, a woman died in Uttar Pradesh’s Hardoi district as she did not receive timely medical treatment. Her son kept on pleading for help outside the community health care centre, but nobody responded. The video of the incident also surfaced on social media.  The heart-wrenching incident took place at the Sawaijour Community Health Centre in the district. Medical Apathy in Uttar Pradesh: Woman Delivers Baby Outside Government Hospital in Bahraich After Doctors Refuse to Admit Her.

In the video, it could be seen that a woman was laying lifeless on the floor outside the community centre. The woman’s son panicked due to her deteriorating condition and was seen pleading for help. He ran post to pillar, knocking doors and windows of the centre. In the footage he could be heard saying. “is anyone there?!” However, he did not get any response. Bihar Medical Apathy: No Ambulance Available, Jehanabad Woman Walks With 3-Year-Old in Arms, Infant Dies.

In Hardoi, the son screaming when the mother did not get treatment but no one was present & mother d¡ed

Mother was suffering, Son Cried for help at the Sawaijpur Community Health Center in Hardoi But No one came for helppic.twitter.com/SJM69Qkr6M

Meanwhile, the hospital authorities issued a clarification over the entire incident. The concerned authorities claimed the man did not bring her mother to the correct gate, reported India Today. The hospital authorities added that they did not notice the man pleading for help as that main gate of the centre was shut after the operational hours, which led to the delay in the treatment.

They said that after the operational hours, the back gate was used for attending pregnant women and emergency cases. Later, the patient was sent to a district hospital in an ambulance, and she died there, claimed the authorities.

(The above story first appeared on LatestLY on Jul 04, 2020 09:12 PM IST. For more news and updates on politics, world, sports, entertainment and lifestyle, log on to our website latestly.com).