Consumers will no longer be able to buy more than one unit of codeine-based cough syrups in Uttar Pradesh, following orders issued by the food and drug administration department. 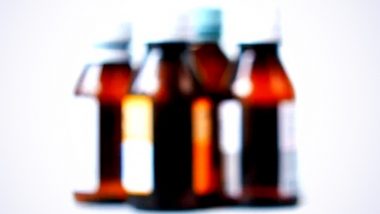 Lucknow, Aug 17: Consumers will no longer be able to buy more than one unit of codeine-based cough syrups in Uttar Pradesh, following orders issued by the food and drug administration department.

Codeine, a medical derivative of opium, is a prodrug used to treat pain, coughing and diarrhoea.

A.K. Jain, drug controller, said: "Though it has mild pain-relieving properties, it is a powerful drug and one can get addicted to it."

Citing provisions under rules 51 and 52 of the Uttar Pradesh Drug Rules, Jain has fixed the number of units a company depot and clearing and forwarding agents (C&F), a whole-seller and a retailer can store and sell to ensure that it is not misused. Delhi Shocker: Man Opens Fire at Mother-in-Law in Sagarpur, Arrested.

As per the order, company depots and C&F agents can store any packing of codeine-based cough syrup, but sell only 500 units of the same.

Retailers will be able to store not more than 100 units of the same and sell only one to a single customer.

The same order also regulates sale of high intensity painkillers like those based on compounds like tramadol, pentazocine and buprenorphine along with anti-depressants like alprazolam, clonazepam, nitrazepam, diazepam in all strengths and combinations.

As per the order, tramadol-based painkillers will be provided only on a medical prescription thought they can buy 20 tablets/capsules/ampoules of alprazolam and clonazepam.

Ten units of nitrezepam and pentazocine are allowed.

However, since anti-depressants belong to the Schedule-H of the drug manual in India, they cannot be bought over the counter which means that prescription is a must for them.

Also, not more than 10 tablets of buprenorphine-based pain killers can be bought by individuals.

The decision comes after the Union government's decision to check the misuse of narcotics-based medicines in the country.

(The above story first appeared on LatestLY on Aug 17, 2022 02:20 PM IST. For more news and updates on politics, world, sports, entertainment and lifestyle, log on to our website latestly.com).