Uttar Pradesh: Loudspeakers, Including Those Used for Azaan From Mosques, Banned in Prayagraj From 10 PM to 6 AM After IG's Letter, Say Reports

Days after Professor Sangita Srivastava, Vice-Chancellor of the Allahabad University (AU), complained that her sleep was disturbed by "Azaan", Prayagraj Range IG KP Singh intervened in the matter.He wrote a letter to DMs and SSPs of Prayagraj, Fatehpur, Pratapgarh and Koshambi. He asked them to follow rules of the Aollution Act. 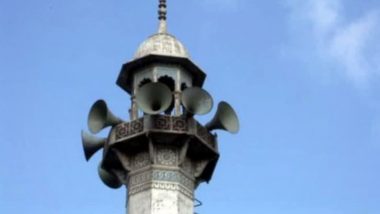 Praygaraj, March 18: Days after Professor Sangita Srivastava, Vice-Chancellor of the Allahabad University (AU), complained that her sleep was disturbed by "Azaan", Prayagraj Range IG KP Singh intervened in the matter. As per reports, Singh wrote a letter to District Magistrates and SSPs of Prayagraj, Fatehpur, Koshambi and Pratapgarh districts asking them to follow Pollution Act and the orders of the Supreme Court and High Courts in this regard. After the letter, loudspeakers reportedly have been banned in these four districts from 10 pm to 6 am, including those used for Azan from Mosques. Allahabad High Court Allows For 'Azaan' From Mosques, Use of Loudspeakers Not Permitted.

According to reports, Singh referred to the Allahabad High Court judgment on a plea of Ghazipur MP Afzal Ansari that reciting Azaan through sound-amplifying devices is not an integral part of Islam. In the judgment in 2020, the court had said that people have the right to sleep without being disturbed by noise pollution. The IG said that people could not play loudspeakers between 10 pm to 6 am under the pollution act. Allahabad University’s First Woman Vice-Chancellor, Sangeeta Srivastava, Targeted by Cyber Fraudsters.

Earlier this month, the Allahabad University vice-chancellor had written a letter to the district magistrate, claiming that her sleep was being disturbed because of 'azaan' in a nearby mosque. She claimed that due to disruptions in her sleep, she suffered headaches which affected her work hours. She said that though she was not against any religion but during 'Ramzan', the announcements over the microphone begin at 4 am, which disturbs other people.

Citing a court verdict, the Allahabad University VC said that 'Your freedom ends where my nose begins". The vice-chancellor has sent copies of her letter to the divisional commissioner Prayagraj and SSP Prayagraj. Maulana Khalid Rashid Farangi Mahali, well-known Sunni cleric and Imam of Aishbagh Idgah, has strongly condemned Srivastava for claiming that her sleep was being disturbed by the 'azaan' It may be recalled that in 2017, singer Sonu Nigam had tweeted about being disturbed by the 'azaan' and the issue had turned into a major controversy. The singer even faced a fatwa against him.

(The above story first appeared on LatestLY on Mar 18, 2021 11:20 PM IST. For more news and updates on politics, world, sports, entertainment and lifestyle, log on to our website latestly.com).