Uttarakhand Assembly Elections 2022: From Pushkar Dhami to Ajay Kothiyal, A Look At Probable CM Candidates in The State

The BJP and Aam Aadmi Party are clear with their choice for the post of chief minister whereas the congress party is yet to name the face of their campaign. 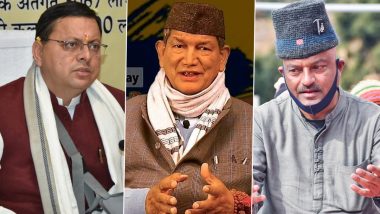 The Election Commission of India (EC) announced dates for assembly elections in Uttarakhand on Saturday. The Uttarakhand Assembly election 2022 will be held in a single phase on February 14. The counting of votes will take place on March 10.

The BJP and Aam Aadmi Party are clear with their choice for the post of chief minister whereas the congress party is yet to name the face of their campaign.  Punjab Assembly Elections 2022: From Bhagwant Mann to Charanjit Channi, A Look at Probable CM Candidates in The State

With weeks left for polls here is the probable chief minister candidate for Uttarakhand.

Born on 16 September 1975 in Tehsil DD Haat of Tundi Gram Sabha, Pithoragarh, Pushkar Singh Dhami is an MLA from Khatima Vidhan Sabha constituency of Udham Singh Nagar district of Uttarakhand. He was elected MLA for the second time from this seat. He has won the 2012 and 2017 elections.

Dhami, who is considered close to former Chief Minister and presently Maharashtra Governor Bhagat Singh Koshyari, has served in other positions in the party including the state president of BJYM and has considerable hold among the youth.

Col Ajay Kothiyal, who fought on behalf of the Indian Army in the Kargil war with Pakistan in 1999, is hailed for playing a pivotal role in the aftermath of the 2013 Kedarnath tragedy — in rescue efforts as well as rehabilitation and rebuilding of Kedarnath. Kothiyal now runs an organisation that trains youngsters in the hills for joining the defence forces. After the announcement of his name as the CM candidate from the party, Col Kothiyal said that he does not know politics, but knows how to deal with challenges. He thanked the party and Arvind Kejriwal for being fielded as a CM candidate in the assembly elections.   Assembly Elections 2022: What is cVIGIL App And How to Use It

Colonel Ajay Kothiyal has been awarded with honors for his work in the army. For his courage and valor, the Government of India has honored him with Kirti Chakra, Shaurya Chakra and Vishisht Seva Medal. He was posted as a captain in the army during the Kargil war with Pakistan in the year 1999. Colonel Kothiyal is also fond of mountaineering.

Harish Rawat's journey from Mohanri, a small village in Almora district in Uttarakhand to the Chief Minister of the state and a cabinet minister in the central government, has been spectacular. He saw many ups and downs in his political career spanning more than 4 decades. In Uttarakhand Congress, he emerged as the tallest leader after Narayan Dutt Tiwari. After the 2013 disaster, he took over as the Chief Minister amid criticism of the government. He contested from two seats while being the Chief Minister and lost both. Yet today he is the face of Congress in Uttarakhand.

(The above story first appeared on LatestLY on Jan 21, 2022 03:45 PM IST. For more news and updates on politics, world, sports, entertainment and lifestyle, log on to our website latestly.com).