The Special Task Force (STF) of Uttar Pradesh police on Friday issued a statement detailing the sequence of events that led to the killing of dreaded gangster Vikas Dubey in an encounter. 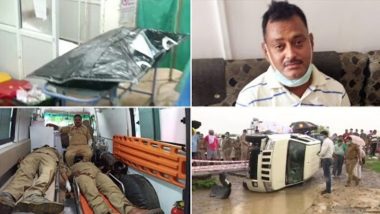 Lucknow, July 10: The Special Task Force (STF) of Uttar Pradesh police on Friday issued a statement and explained the circumstances in which dreaded gangster Vikas Dubey was killed in an encounter. In its press release, the UP STF said the vehicle carrying Vikas Dubey, who was accused of killing eight policemen in Kanpur on July 3, met an accident after a herd of cattle came in front of it. Efforts were made to nab Dubey alive, it added. Vikas Dubey's Killing Raises Handcuffing Issue Vis-a-vis Supreme Court Guidelines on Inhuman Practice.

"A herd of cows and buffalo suddenly came in front of the vehicle carrying Vikas Dubey near Kanhaiya Lal hospital. The vehicle overturned when the driver, exhausted after a long journey, attempted to save the animals, leaving five policemen seriously injured," said the UP STF. According to the press release, Dubey took advantage of the situation, snatched a pistol from injured personnel Ramakant Pachauri and attempted to escape. Vikas Dubey Encounter: Rahul Gandhi Raises Doubt on Gangster's Death, Says 'Don’t Know How Many Questions Have Saved the Dignity'.

"Soon other personnel of STF following the vehicle carrying Dubey reached the accident site. STF Superintendent of Police Tejbahadur Singh along with other policemen went after Dubey. During the chase, Dubey opened fire at cops. Police tried to go close to him to nab him alive but he continued to fire relentlessly. In self-defence, cops retaliated and Dubey fell down after a bullet hit him. He was taken to a hospital where he succumbed," the UP STF stated.

UP STF on Vikas Dubey's Encounter:

STF issues press note in #VikasDubey encounter matter. "A herd of cattle had come in front of the vehicle due to which driver took sudden turn leading to accident...Police tried to go close to him to nab him alive but he continued to fire. Police retalitaed in self-defence..." pic.twitter.com/iOXaXv8vno

Two policemen sustained injuries during firing by Dubey, according to the STF's press release. Dubey and his accomplices were accused of killing eight policemen on July 3 in Bikru village. He was arrested on Thursday from a temple in Madhya Pradesh's Ujjain. Many believe that Dubey would have been instrumental in unearthing the network between gangsters, politicians and policemen. His encounter, however, brought a full stop to the possibility of exposing the nexus.

(The above story first appeared on LatestLY on Jul 10, 2020 05:25 PM IST. For more news and updates on politics, world, sports, entertainment and lifestyle, log on to our website latestly.com).