The IMD forecast stated that mercury is set to rise in Delhi, Punjab, Haryana, Chandigarh, Rajasthan, West Uttar Pradesh during the next 2 days and over and West Madhya Pradesh during next 24 hours. 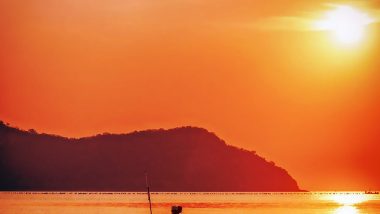 New Delhi, June 30: Heatwave conditions are expected to grip parts of North India in the coming days, a weather forecast by the India Meteorological Department (IMD) said on Wednesday. The IMD forecast stated that mercury is set to rise in  Delhi, Punjab, Haryana, Chandigarh,  Rajasthan, West Uttar Pradesh during the next 2 days and over and West Madhya Pradesh during next 24 hours. According to reports, Delhi witnessed the first severe heatwave of the year on Tuesday, June 29, as the maximum temperature soared up to 43 degree Celsius. This is the highest recorded so far this year, the met department said.

The sudden change in the weather patterns is due to the dry westerly or southwesterly winds from Pakistan to northwest India at lower levels. Giving details about the southwest monsoon in India, the IMD said that the progress of the monsoon in North India is expected to be slow as conditions are not yet favourable for rainfall in the region for at least a week.

Due to the weak progress of southwest monsoon, subdued rainfall activity is very likely to continue to prevail over Northwest, Central and Western parts of Peninsular India during the next 6-7 days. "Prevailing meteorological conditions, atmospheric features and forecast wind pattern by dynamical models suggest that no favourable conditions are likely to develop for further advance of southwest monsoon into remaining parts of Rajasthan, west Uttar Pradesh, Haryana, Chandigarh and Delhi and Punjab during next 6-7 days", the IMD said.

(The above story first appeared on LatestLY on Jun 30, 2021 03:59 PM IST. For more news and updates on politics, world, sports, entertainment and lifestyle, log on to our website latestly.com).