PM Narendra Modi on Independence Day 2019: Post Article 370, One Can Proudly Say 'One Nation, One Constitution' 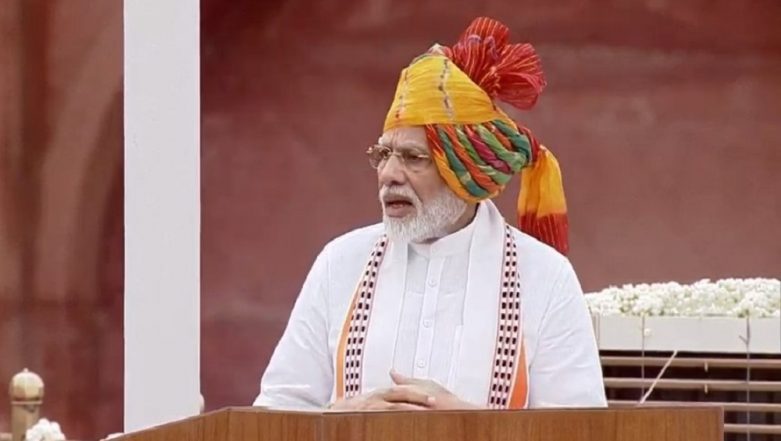 New Delhi, August 15: Prime Minister Narendra Modi on Thursday said with the abrogation of Article 370 and 35A in Jammu and Kashmir, the dream of "One Nation, One Constitution" has been realised, as he lashed out at the opposition speaking against the move, asking if they felt it was so necessary why didn't they make it permanent in the past 70 years. PM Narendra Modi Independence Day 2019 Address From Red Fort: Prime Minister Links Kashmir Move to Sardar Vallabhbhai Patel's Dream; Here Are Highlights of His August 15 Speech.

Addressing the nation from the ramparts of the Red Fort, Modi said his government within 70 days of its second term had revoked Article 370 and 35A, doing the work that previous governments have been unable to do in the past 70 years.

Attacking those opposing the abrovation of special status for Jammu and Kashmir, he said: "For those speaking in favour of Article 370 and 35A, the country is asking if they were so important for changing the country's fortunes, then why didnt you make it permanent? Why did you keep it as temporary (clauses)?" "If you had the conviction, why didn't you make it permanent?"

"For me the country's future is everything, not my political future," he said. "Now one can say with pride, One Nation, One Constitution," Prime Minister Modi said. He said the decision to revoke Article 370 was a step towards realising the dream of Sardar Vallabhbhai Patel of a united India. PM Narendra Modi Expresses Concern Over 'Population Explosion', Advocates Measures to Deal with It.

"In this short span of time, we have taken important steps in every sector. Article 370 and 35A being revoked from Jammu and Kashmir is a step towards realising the dream of Sardar Patel."

On abolishing Triple Talaq, he said it was aimed at benefitting Muslim women. Modi said the country has taken several steps for women, including ending the evil of female foeticide. "If we can take so many steps then why not raise our voices against the evil of Triple talaq, so that our Muslim sisters get equal respect and are part of the country's progress. The decision is not to be weighed in political terms," he said.

Modi also announced a new Jal Jeevan Mission for realising the vision of Har Ghar Jal, or drinking water to every home, with an allocation of Rs 3,59,000 crore. He also paid tribute to the those who laid their lives for the Independence of the nation. PM Modi Address to Nation on Independence Day 2019 From Red Fort Live Updates.