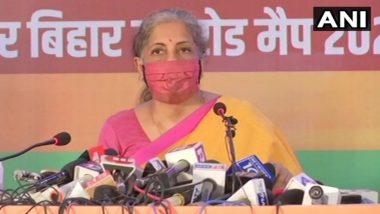 She appealed to all the people of the state to vote for NDA and make it win. "Nitish Kumar will be the Chief Minister of Bihar for the next 5 years. Under his rule, Bihar will become a progressive and developed state of India," said Nirmala Sitharaman. Bihar Assembly Elections 2020: Mahagathbanthan Releases Poll Manifesto, From Promising to Provide 10 Lakh Jobs to Assurance to Scrap Farm Laws; Key Highlights of Poll Promises.

Free COVID-19 Vaccine for every person in Bihar:

As soon as #COVID19 vaccine will be available for production at a mass scale, every person in Bihar will get free vaccination. This is the first promise mentioned in our poll manifesto: Union Minister Nirmala Sitharaman at the launch of BJP Manifesto for #BiharPolls pic.twitter.com/x4VjVmkA3Q

Here Are Some of the major highlights of BJP Manifesto:

She further mentioned that as soon as the coronavirus vaccine will be available for production at a mass scale, every person in Bihar will get free vaccination. This is the first promise mentioned in the poll manifesto.

Further talking about how GDP in Bihar has improved under NDA rule, she said that it has grown from 3 percent to 11 percent in the state in the past 15 years. "It was made possible because our government gave priority to good governance for people," said BJP leader.

"Education sector is also key for the state so we are giving importance to primary education to higher education in the party manifesto, especially new education policy will change the model of education in-country as well as state and students of Bihar are highly dependent on education so New education will prove very fruitful for Bihar", BJP leader further said.

The BJP has promised 19 lakh jobs to the people of Bihar in the next five years. Revealing the 'Sankalp Patra' in Patna, Finance minister Nirmala Sitharaman said that the BJP government, if returns to power after the elections, will provide pucca house to 30 lakh people before 2022.

The manifesto added that three lakh teachers will be hired. It also mentions that AIIMS will come up in Darbhanga by 2024.

The BJP is contesting the Bihar election in alliance with Nitish Kumar`s Janata Dal (United). The JD(U) is contesting on 122 seats and BJP on 121 in the 243-member state Assembly.

(The above story first appeared on LatestLY on Oct 22, 2020 11:44 AM IST. For more news and updates on politics, world, sports, entertainment and lifestyle, log on to our website latestly.com).