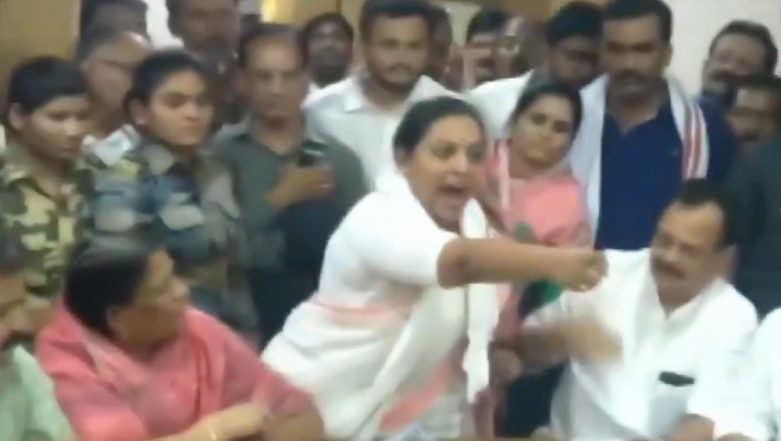 Amravati, May 14: The election campaigning and political activities across the states in India are on full-swing as the Lok Sabha Elections 2019 inches closer to its conclusion. However, various instances of political leaders violating the model code of conduct and losing their cool has been reported during the election time. One such incident has been reported from Maharashtra's Amravati where Congress MLA Yashomati Thakur from Teosa abused public officials on camera. Lok Sabha Elections 2019: Haryana BJP Leader Shoots at Cousin For Voting For Congress Candidate.

The discussion escalated over the issue of water and MLA Yashomati Thakur goes into a fit of rage and can be seen shouting and breaking a glass. She then warned the official to "not smile" and abused the official in open meeting in front of the party workers and officials. Lok Sabha Elections 2019 Results Likely to be Displayed on Digital Traffic Signboards in Mumbai.

Yashomati Thakur, Congress MLA from Teosa, clarified about the incident saying, "authorities were supposed to release water but didn't, so we had to become aggressive. We've been demanding release of water since last 2 weeks, Collector had also ordered release of water from Upper Wardha but the BJP MLA intervened."