The West Bengal government said the state Chief Secretary and DGP, who have been summoned by the MHA in connection with an attack on JP Nadda's convoy, won't attend the meeting on December 14. 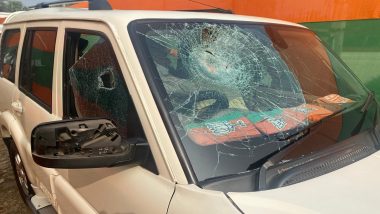 Kolkata, December 11: The West Bengal government on Friday said the state Chief Secretary and Director General of Police (DGP), who have been summoned by the Ministry of Home Affairs (MHA) in connection with an attack on BJP president JP Nadda's convoy, won't attend the meeting. The Union Home Secretary called West Bengal's Chief Secretary and DGP on December 14 "to discuss the law and order situation... including the recent attacks on Z-category protectees".

The Chief Secretary and DGP will not attend the meeting as the incident was "already being examined", the Mamata Banerjee government said. The MHA summoned the top officials after Governor Jagdeep Dhankhar, in his report to Union Home Minister Amit Shah, said the law and order situation was deteriorating in the state. Nadda's convoy was allegedly attacked with stones and bricks while he was on his way to Diamond Harbour on Thursday. West Bengal: One Dead After BJP Workers and Police Clash in Siliguri, Party Calls For 12-Hour Bandh.

Attacking the Mamata Banerjee government, Shah said that West Bengal has gone into an era of "tyranny, anarchy and darkness under the Trinamool rule". He added that the Bengal government will have to answer to the peace-loving people of the state for this "sponsored violence".

(The above story first appeared on LatestLY on Dec 11, 2020 06:52 PM IST. For more news and updates on politics, world, sports, entertainment and lifestyle, log on to our website latestly.com).