The Karnataka assembly on Wednesday erupted in laughter after it emerged that panche (dhoti) of Congress leader Siddaramaiah was slipping down. 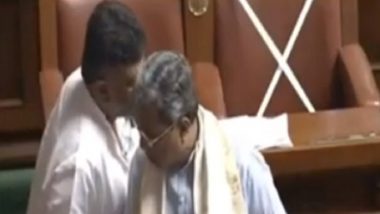 Bengaluru, September 23: The Karnataka assembly on Wednesday erupted in laughter after it emerged that panche (dhoti) of Congress leader Siddaramaiah was slipping down. The incident took place when Siddaramaiah was speaking on the police's response to a brutal gangrape in Mysuru. The Leader of Opposition was alerted about his slipping dhoti by his party colleague DK Shivakumar. A video of the incident is going viral. Karnataka Assembly Session: Siddaramaiah, CM Bommai Clash on Inflation Issue.

While Siddaramaiah was speaking, Shivakumar came to him and whispered in his ear that his dhoti was about to fall. "Oh, is that so?" Siddaramaiah was heard telling him in the video. He then sat down and told the House that he would continue his speech after tying up his dhoti. This left everyone in splits. "It’s tricky if you yourself disclose what the issue is," Madhu Bangarappa, who was in the Chair, commented. Land Worth Rs 300-400 Cr Given for Chanakya Varsity at Rs 50 Cr, Alleges Siddaramaiah.

While tightening his dhoti, Siddaramaiah said he has put on weight after recovering from coronavirus (COVID-19) infection. "My panche has come off, Eshwarappa. Of late, my paunch has increased and my ‘panche’ keeps coming off," he said while addressing Rural Development and Panchayat Raj Minister KS Eshwarappa. Someone from the ruling side then intervened and offered help.

Siddaramaiah responded: "Since you are sitting on the other side, I will not ask you for help." Commenting on the incident, on a lighter note, Congress MLA Ramesh Kumar said: "Our president DK Shivakumar whispered in Siddaramaiah's ear to save his and party's image. But Siddaramaiah announced it to the entire House. Now, people from BJP will be waiting to dent our image."

(The above story first appeared on LatestLY on Sep 23, 2021 04:42 PM IST. For more news and updates on politics, world, sports, entertainment and lifestyle, log on to our website latestly.com).