The final percentage is likely to go up marginally, as voters were still in queues after the gates of the polling stations were shut at 6 p.m., he added. A record 86.40 per cent was registered in Chikkaballapur, a rural constituency, about 60km east of Bengaluru. 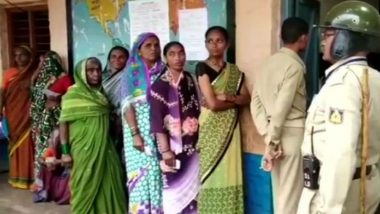 Bengaluru, December 5: An estimated 62.18 per cent average voting was registered in the crucial by-elections on Thursday to 15 Karnataka Assembly constituencies, whose results will have a key bearing on the state's political future. "The average voting for all the 15 Assembly seats after polling ended at 6 p.m. is an estimated 62.18 per cent, with heavy turnout (over 75 per cent) in 8 rural segments and below 50 per cent in 4 Bengaluru seats," poll official G. Jadiyappa told IANS here.

The final percentage is likely to go up marginally, as voters were still in queues after the gates of the polling stations were shut at 6 p.m., he added. A record 86.40 per cent was registered in Chikkaballapur, a rural constituency, about 60km east of Bengaluru. Congress defector K. Sudhakar is the ruling BJP's candidate in this prestigious seat. K.R. Pete in Mandya district recorded a whopping 80 per cent. BJP fielded K.C. Narayana Gowda, a Janata Dal-Secular (JD-S) defector from this rural segment. Karnataka Bypolls 2019: Section 144 From December 3-6, Announces Bengaluru Police, Dry Days Likely to be Observed.

Athani in Belagavi district in the state's northwest region, recorded 75.23 per cent, where Congress defector Mahesh Kumatahalli contested on a BJP ticket. Likewise, Hunasuru in Mysuru district registered 74.47 per cent. The BJP fielded JD-S defector A.H. Vishwanath from this rural seat. Gokak in Belagavi district has registered 73.08 per cent. Congress defector Ramesh Jarkiholi contested on the BJP ticket in this high-profile seat.

Hirekerur in Belagavi district recorded 72.42 per cent. The BJP fielded Congress defector B.C. Patil from this rural segment. As in the past, the four assembly segments in Bengaluru registered below 50 per cent, with the lowest - 37.50 per cent in K.R. Pura in the city's eastern suburb. Congress defector Byrathi Basavaraj is the BJP candidate from this urban seat.

Voting percentage in other three assembly segments are Kagwad 69.76, Ranibennur 67.92 and Vijayanagara 58.93. Barring glitches in the EVMs and voters names missing in the electoral list in some polling stations, voting was peaceful amid tight security. There were also reports of voters boycotting the polls in some areas over various issues. The 15 constituencies had nearly 38 lakh eligible voters - 19.25 lakh men and 18.52 lakh women.

As many as 165 candidates, including 126 Independents and 9 women are in the fray in the 15 Assembly seats, necessitated by the resignation - and subsequent disqualification - of 14 Congress and three Janata Dal-Secular rebel MLAs which led to the collapse of the then H.D. Kumaraswamy-led Congress-JD-S coalition government. However, bypolls are only being held in 15 seats, since there is ongoing litigation in the Karnataka High Court over the results of two seats -- Muski (Raichur district) and R.R. Nagar (Bengaluru) in the May 2018 Assembly elections.

The BJP and the opposition Congress contested in all the 15 Assembly seats, while the JD-S only in 12 seats. The vote count is on December 9. The outcome of the bye-elections will decide the survival and continuation of the four-month-old BJP government in the southern state. The ruling BJP, which has 105 members, including one independent but excluding the Speaker, needs to win seven more seats to have a majority in the 225-member Assembly, whose current strength is 223. The Congress has 66 members, the JD-S 34 and the Bahujan Samaj Party (BSP) one.

(The above story first appeared on LatestLY on Dec 05, 2019 09:50 PM IST. For more news and updates on politics, world, sports, entertainment and lifestyle, log on to our website latestly.com).