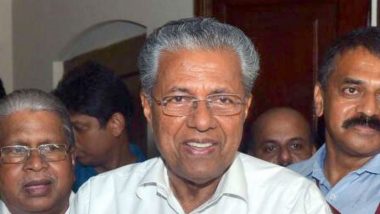 Thiruvananthapuram, July 7: Kerala Chief Minister Pinarayi Vijayan on Tuesday denied any links between his office and Swapna Suresh, the prime accused in a gold smuggling case. Addressing the media, Pinarayi Vijayan said the woman was hired on a contract basis through an agency for a project in the state's IT department. Vijayan apart from holding the Home portfolio also heads the IT department. What is Kerala's Gold Smuggling Case And Why is CM Pinarayi Vijayan Under Attack?

The Chief Minister said: "The woman in question in Thiruvananthapuram gold smuggling case has no connection with CMO or IT Dept. This woman was working as a Marketing Manager for a project under the IT department as a contract employee. She was taken through a placement agency." Asserting that the Kerala government had no role in the gold smuggling, Vijayan said the central government should be held responsible as it oversees airports. Kerala Gold Smuggling Case: UAE Embassy Extends Full Cooperation With Indian Customs Authorities, Urges Stringent Legal Action Against Culprits.

Vijayan has been facing heat since it emerged that Swapna Suresh had a close relationship with senior IAS officer M Sivasankar, who was holding the post of Principal Secretary to the Chief Minister until he was removed on Tuesday. It was also reported that Swapna got a plush job in the state's IT department where Sivasankar was serving as Secretary until today.

(The above story first appeared on LatestLY on Jul 07, 2020 07:19 PM IST. For more news and updates on politics, world, sports, entertainment and lifestyle, log on to our website latestly.com).