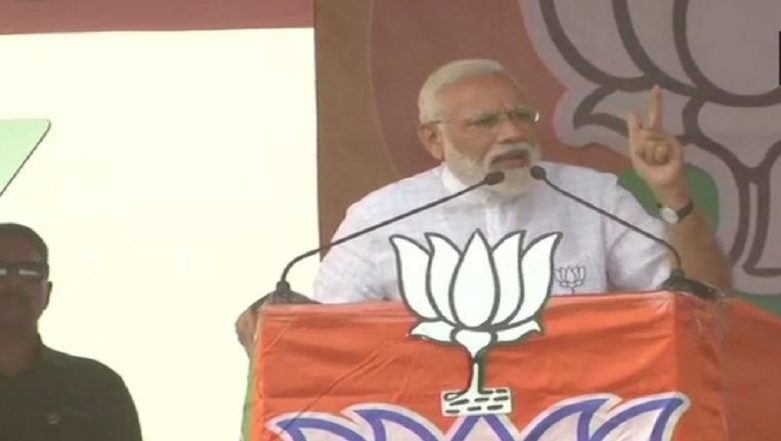 Kolkata, April 3: Prime Minister Narendra Modi on Wednesday launched a scathing attack on West Bengal Chief Minister Mamata Banerjee during his election rally in Kolkata. Taking a dig at Banerjee for questioning the government over the Indian Air Force’s air strikes in Balakote, PM Modi said that the West Bengal CM led down the morale of the forces. PM Narendra Modi Dares Opposition to Debate on Employment And Development, Says 'Nobody Can Question My Patriotism'.

The Prime Minister also called Banerjee a ‘speed-breaker’ in the path of development of the state during a public rally in Siliguri. He said, “There is a speed-breaker in West Bengal which you know by the name of 'Didi'. This 'Didi' is the speed-breaker in your development.” PM Modi further added that he is waiting for this speed breaker to go so development can gather speed.

Earlier in the day, PM Modi attended a rally at Pasighat in Arunachal Pradesh. He tore into the Congress, terming its manifesto as a "hypocrisy document" which was "full of lies". Addressing his second rally in Arunachal Pradesh within a week, the prime minister cited the Congress manifesto for the 2004 Lok Sabha elections, and said it had promised that every house would have electricity by 2009.