NCP Chief Sharad Pawar Throws Shade at Results Predictions, Says 'No Cause For Concern as Exit Polls Only Nautanki' 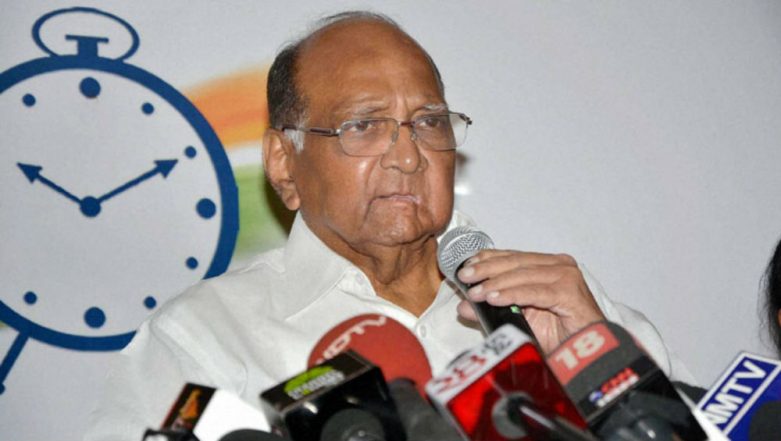 Mumbai, May 20: Nationalist Congress Party chief Sharad Pawar on Monday said that the exit poll projecting that Bharatiya Janata Party-led National Democratic Alliance (NDA) will retain power at the centre was a nautanki (farce). Pawar, who was speaking from an Iftar party hosted by him in Mumbai, said the truth will be out when counting of votes for 2019 general polls will be announced on May 23. Maharashtra Exit Poll Results For Lok Sabha Elections 2019 In All Constituencies.

"There is a strange atmosphere in the country today...After 6 pm yesterday, there was a sense of unease after seeing all the TV channels and newspapers. People have been calling me...I told them that an attempt is being made by those who control the electronic media to present a different view (through the exit polls)...The truth will come out after two days (on May 23)," Pawar said.

Taking a swipe at PM Narendra Modi's visit to Kedarnath, the NCP supremo said, " I have never seen that after elections, those who shoulder the country's responsibility have left Delhi and gone to the Himalayas." "There is 'nautanki' in politics also," Pawar said. Sharad Pawar Again Raises Doubts Over EVMs, Says 'Saw My Vote For NCP Going to BJP'.

Meanwhile, Exit polls on Sunday forecast another term for the BJP government, with some of them projecting that the NDA will get more 300 seats easily to cross the majority mark of 272 in the Lok Sabha. In Maharashtra, the BJP-Shivsena alliance is predicted to get 38-42 seats while the Congress-NCP and its allies can get 6 to 10 seats.