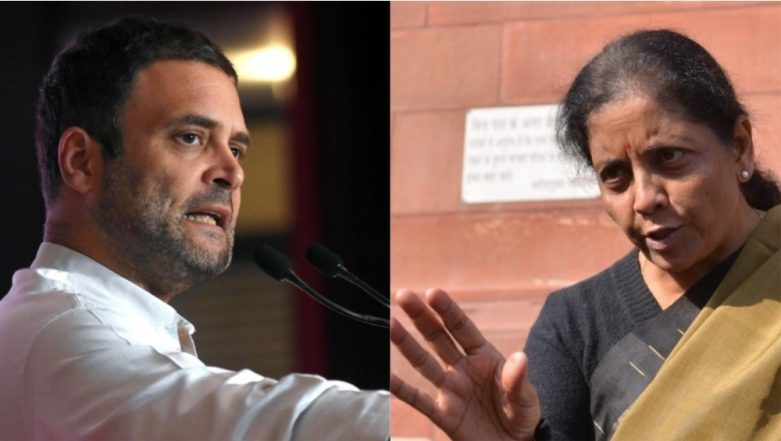 New Delhi, January 7: The sniping over Rafale deal showed no signs of ending with the Congress President Rahul Gandhi on Monday challenging Prime Minister Narnendra Modi for a debate on the Rafale deal and accusing Defence Minister Nirmala Sitharaman of "lying" over the contracts given to public sector undertaking HAL even as she accused him of raising "incorrect and misleading" doubts regarding her statement in Parliament.

Law Minister Ravi Shankar Prasad also slammed Gandhi describing his allegations on the deal to purchase fighter jets from France as "completely false" and said these were based on complete "commercial interests" and to "promote a competitor." Making a suo motu statement in the Lok Sabha, Sitharaman said she had received confirmation from Hindustan Aeronautics Limited (HAL) that during 2014 to 2018, contracts amounting to Rs 26,570.80 crore had been signed with the public sector company and orders worth approximately Rs 73,000 crore were in the pipeline. Nirmala Sitharaman Rebuts Rahul Gandhi in Lok Sabha, Says Contracts Worth Rs 26,570 Crore Signed With HAL, Calls Doubts Raised on Her 'Misleading'.

"Doubts are being raised on my statement made on the floor of the house on January 4 regarding procurement orders in the pipeline for HAL... I would like to set all doubts to rest by adding that I have received confirmation from HAL that during 2014-2018, contracts amounting to Rs 26,570.80 crore have already been signed with HAL and orders approximately of Rs 73,000 crore are in the pipeline," she said without naming Gandhi. Nirmala Sitharaman Slams Rahul Gandhi in Lok Sabha Over Rafale Deal, Says ‘Congress is Shedding Crocodile Tears For HAL’.

Placing documents related to those orders on the floor, Sitharaman said they "clearly confirm the correctness of my statement made on the floor of this house and (prove that) the doubts raised in this regard are incorrect and misleading". Gandhi had alleged on Sunday that Sitharaman had "lied" to Parliament asked her to produce documents that the government had given contracts of Rs one lakh crore to HAL.

Gandhi kept up his attack on Monday following her statement in the Lok Sabha and described her as a "spokesperson of Narendra Modi". He said only contracts worth Rs 26,570 crore have been given to HAL not Rs 1 lakh crore "as stated" by the Minister while replying to a debate in the Lok Sabha last week.

He said the Modi government had given Dassault Aviation Rs 20,000 crore though they had not delivered a single Rafale aircraft but HAL, which had delivered on its orders including helicopters, was awaiting payment of Rs 15,700 crore. He accused the government of trying to wreck HAL. Gandhi also accused Modi of doing a "bypass surgery" on the Rafale deal and said Sitharaman should give a "yes" or "no" answer to his question.

"I am asking Prime Minister and Defence Minister: Did officials of Air Force, Defence Ministry say that Narendra Modi had interfered in the deal," he said. The Congress chief said when he raised the question in Parliament, Sitharaman started talking about her middle class background which was "also not true". He accused Modi of being scared of facing Parliament.

"The chowkidar of the country is scared to face Parliament. He cannot stand in a Rafale debate. Give me 15 minutes with Narendra Modi, the whole country will know (the truth)," he said. Gandhi also tweeted and said it is surprising that HAL doesn't have enough cash to pay salaries. Party leader Kapil Sibal also attacked the Modi government.

Prasad told the media that available documents in the public domain raised serious suspicious circumstances of the intention of Rahul Gandhi and Congress. "It is too well known that the Congress party is never happy unless there is deal in the defence deal. Why is it that the leading family namely the Gandhi family appear in documents after documents, be it the AgustaWestland, be it the Air Force fighter planes for Rafale and their competitor Eurofighter?" he asked.

"Today a media house has come out with a document which says a strategy paper seized during the raids at Italian middleman Guido Haschke's residence and offices has revealed that Christian Michel and Haschke worked on a plan to place Rafale's prime competitor in the win zone."

He said that one of of the middlemen Michel, a British national who is under detention, and others were also pushing the case for Eurofighter, which was in competition with Rafale. He claimed that the documents which have been shown were "explosive" in nature. Firing salvos at the Congress chief, Prasad said: "Please explain what proximity you and your family have with Michel and Hasche?"

He said that despite Dassault emerging as the lowest bidder, the Congress government wanted a review of the decision-making process. "How long will you keep on playing with national security?" he asked.