Rahul Gandhi Congratulates PM Narendra Modi For His First Press Conference, Says 'Next Time Amit Shah May Allow You To Even Answer A Couple Of Questions' 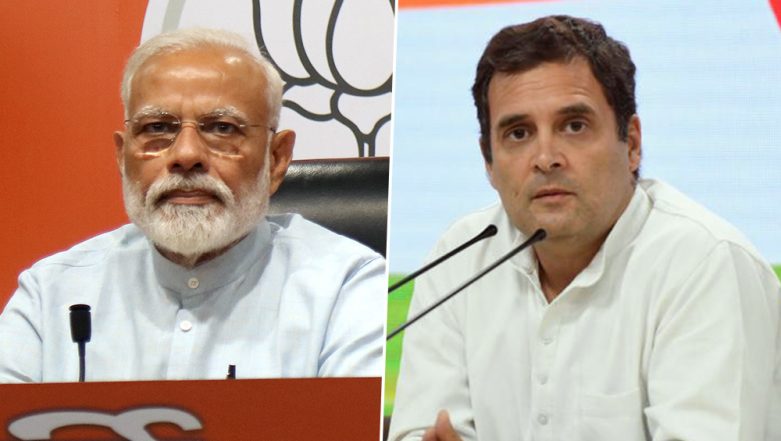 New Delhi, May 17: Congress President Rahul Gandhi on Friday took a dig at Prime Minister Narendra Modi's first press conference in in five years. Gandhi congratulated PM Narendra Modi and said in his tweet that, "Congratulations Modi Ji. Excellent Press Conference! Showing up is half the battle." However, the appreciation ended there itself as Gandhi took a potshot at PM Modi for not taking questions in the conference and largely speaking about himself in the press meet. The questions asked to PM Modi were answered by Amit Shah in the conference. PM Narendra Modi Addresses 1st Press Conference in 5 Years, Amit Shah Answers All Questions on His Behalf.

"Next time Mr Shah may even allow you to answer a couple of questions. Well done!" said Gandhi sarcastically, in his tweet.

Congratulations Modi Ji. Excellent Press Conference! Showing up is half the battle. Next time Mr Shah may even allow you to answer a couple of questions. Well done! 👍

Though it was the first-ever press conference attended by Modi in his prime ministerial term, all questions directed at him were answered by Shah on his behalf. Modi highlighted the effectiveness of his government which has managed to simultaneously make arrangements for the Indian Premier League, the festival of Ramzan, the General Elections, along with other events. Prime Minister Narendra Modi's Lok Sabha constituency is among the 59 seats that will go to polls on Sunday, in phase seven of the Lok Sabha Elections.