UP Assembly Elections 2022: All Ministers in Yogi Adityanath’s Government to Camp in Districts in a Damage Control Exercise

In a major damage control exercise, all ministers in the Yogi Adityanath government in Uttar Pradesh have been asked to reach out to people ahead of the 2022 assembly elections in the state. 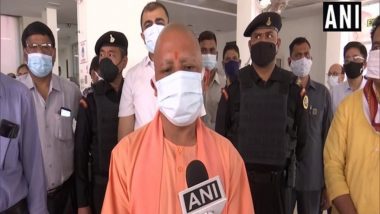 Lucknow, June 15: In a major damage control exercise, all ministers in the Yogi Adityanath government in Uttar Pradesh have been asked to reach out to people ahead of the 2022 assembly elections in the state.

The ministers have been asked to camp in development blocks in districts under their charge in June and July 2021, connect with party workers at the grassroots level, obtain feedback about government schemes, attend International Yoga Day programmes there on June 21 and join the booth level workers in listening to Prime Minister Narendra Modi's "Maan Ki Baat" programme at booths on June 27.  Uttar Pradesh Assembly Elections 2022: AIMIM Keen on Contesting 100 Seats, Asaduddin Owaisi to Take Final Call, Says Party's State Chief

The directives were communicated to them at a meeting of the council of ministers, chaired by Yogi Adityanath.

UP BJP president Swatantra Dev Singh, who was present at the meeting, briefed the ministers about the details of the outreach programme.

The ministers have also been asked to review the preparations for the speculated third wave and visit the families of those who may have died of Covid-19. He said ministers would take feedback whether the government relief had reached them.

The exercise is also being seen as a move to muster support for the BJP in the upcoming zila panchayat elections.

According to UP minister Siddhartha Nath Singh, "Minister in charges will camp at the blocks in districts under their charge in June and July 2021. The ministers will try to cover most of the blocks in the districts under their charge and will cover about two blocks every day. The ministers will visit ration shops, PHCs (primary health centres), CHCs (community health centres) and hospitals, attend plantation drives, along with making spot visits, and reviewing implementation of development schemes."

Singh said ministers have been asked to hold organisational meetings in smaller groups, keeping in view the Covid protocol. He said there would also be programmes, especially plantation drives from June 23 to July 6.

During the meeting, minister for medical education Suresh Khanna and minister for health Jai Pratap Singh made a presentation on the state government's Covid management.

Animal husbandry minister Chaudhary Laxmi Narain spoke about the arrangements made at the cow shelters in the state.

(The above story first appeared on LatestLY on Jun 15, 2021 11:50 AM IST. For more news and updates on politics, world, sports, entertainment and lifestyle, log on to our website latestly.com).