SC Issues Notices to All State Governments, UTs on PIL Alleging Registering of Cases Under Quashed Section 66A of IT Act

The Centre has told the top court it is the primary duty of states and UTs to stop registering cases under Section 66A of the IT Act after the provision was quashed by it. 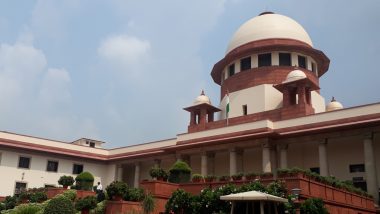 New Delhi, August 2: The Supreme Court on Monday issued notices to all state governments and union territories (UTs) on a plea complaining that people were being booked under Section 66A of the Information Technology (IT) Act, which has been quashed by the top court.

A bench comprising justices R.F. Nariman and B.R. Gavai directed that notice should be served to registrar general of all high courts and listed the matter for further hearing after 4 weeks.

On Monday, during the hearing the bench noted that judiciary's aspect can be taken care of separately, but there is police also who are charging people under this section. The bench said there needs to be one proper order because this cannot continue like this.

The Centre, in its affidavit, had said: "It is submitted that 'police' and 'public order' are state subjects as per the Constitution and prevention, detection, investigation and prosecution of crimes and capacity building of police personnel as primary responsibility of states".

According to the central government, 21 states and UTs have reported compliance with the 2015 judgment in their letters to the ministry of information and technology.

(The above story first appeared on LatestLY on Aug 02, 2021 01:00 PM IST. For more news and updates on politics, world, sports, entertainment and lifestyle, log on to our website latestly.com).