An FIR was also lodged against Tiwari by the EDMC for allegedly breaking the seal of the premises in Gokalpuri area in north-east Delhi on September 16. 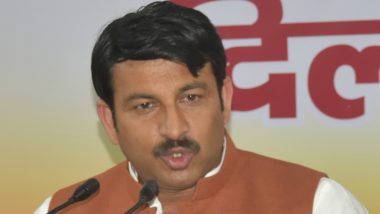 New Delhi, November 22: The Supreme Court Thursday closed contempt proceedings against BJP MP Manoj Tiwari for breaking the civic agency's seal on a premises here in September even as it slammed him for levelling frivolous allegations against the court-mandated committee, saying it shows how "low he can stoop". A bench headed by Justice Madan B Lokur said the court was "extremely pained" due to his conduct as he is an elected representative and deprecated his action of taking law into his own hands. The apex court also said that "misplaced political propaganda has no place" and "such practices should be deprecated".

The apex court had on September 19 issued contempt notice against Tiwari, the Delhi BJP chief and a Member of Parliament (MP) from the north-east Delhi constituency, after taking note of a report filed by the monitoring committee which had alleged that the BJP leader had broken the seal of the premises. An FIR was also lodged against Tiwari by the EDMC for allegedly breaking the seal of the premises in Gokalpuri area in north-east Delhi on September 16. The court had on October 30 reserved its order after hearing arguments in the matter during which Tiwari had accused the court-mandated monitoring committee of "terrorising" people of Delhi. Tiwari Tries to Break Sealing of House Again; AAP, Cong Slam It as 'drama'.

The panel, however, had claimed that he was trying to make the court a "political battleground". Tiwari had claimed before the top court that monitoring committee has exceeded its jurisdiction and conducted sealing drive in unauthorised colonies here that were protected under the law. Tiwari's counsel had said a mob of around 1,500 people had gathered at the spot and if the MP had not broken the seal in a "token protest", any untoward incident could have happened there. He had also argued that there was no violation of the top court order in the matter, as projected by the committee.

The top court had earlier ordered restoration of its 2006 monitoring committee to identify and seal unauthorised structures in Delhi. The monitoring committee, comprising K J Rao, former advisor to the Election Commissioner, Bhure Lal, chairman of Environment Pollution (Prevention and Control) Authority, and Major General (Retd) Som Jhingan, was set up on March 24, 2006, by the top court.