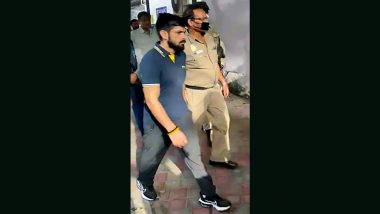 According to them, Bishnoi, who is in the custody of the Delhi Police's Special Cell, has alleged that Moosewala was involved in the killing of Akali Dal youth leader Vikramjit Singh alias Vicky Middukhera on August 7 last year which led to a "rivalry" between him and the Punjabi singer.  Sidhu Moose Wala Murder: Neeraj Bawana Gang Vows Revenge For Singer's Death in 2 Days

Bishnoi has been very uncooperative and has not yet disclosed the names of his gang members who were the real conspirators being the killing, officials said.

The 28-year-old singer-politician was shot dead by some unidentified assailants in Punjab's Mansa district on May 29, a day after the Punjab government curtailed his security cover.

The Delhi Police Special Cell, which is probing the matter, got the custody of Bishnoi for three days after arresting him from Tihar in a case registered under the Arms Act, officials added.

"Bishnoi has been very uncooperative so far. But during interrogation, he accepted that he had a rivalry with Moosewala and claimed that his gang members killed the singer.

"He has revealed that Goldy Brar was one of the gang members who conspired and executed the killing of Moosewala but has not yet disclosed the names of other associates who were the real conspirators and executioners of the killing," a police official said.

The official said, "Bishnoi has not disclosed the exact motive behind executing the killing and has been uncooperative about revealing other details about the murder."

Bishnoi, who is facing nearly 60 cases, was lodged in Central Jail number eight of Tihar.

Gangster Kala Jathedi and his aide Kala Rana, who were in police custody in a different case, were also questioned in connection with the killing of Moosewala.

According to officials, after questioning Bishnoi in Tihar prison, he was produced at the Patiala House court and was remanded in three days of police custody for questioning in connection with the case where three criminals were arrested after a brief encounter with the Special Cell's unit last month.

During interrogation, the arrested criminals had disclosed that the weapons recovered from them were supplied by Bishnoi, a senior police official said.

The development came a day after a Delhi court refused to entertain a plea filed by Bishnoi seeking a direction to the jail authorities not to give his custody to Punjab police, which suspects that he had plotted the singer's killing.

Bishnoi has moved the Delhi High Court under the apprehension of a fake encounter by the Punjab Police.

The Punjab Police had earlier said Moosewala's killing seemed to be the result of an inter-gang rivalry and the Lawrence Bishnoi gang was involved in it.