The three poachers were arrested on Sunday and later sent to the district jail in Lakhimpur for allegedly killing palm civet cats of Dudhwa Tiger Reserve. 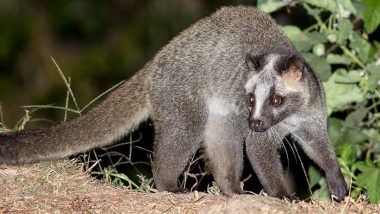 Uttar Pradesh, August 2: A forest patrol team has arrested three poachers who were trying to sneak out of the Mailani range of Dudhwa Tiger Reserve with two carcasses of palm civet cats that they had allegedly killed.

The three were arrested on Sunday and later sent to the district jail in Lakhimpur.

According to Anil Patel, deputy director, Dudhwa (buffer), "Patrolling in the area has been intensified during monsoon and our patrol team detected some suspicious activity in Mailani range.

"They caught three men-- Laxman, Banwari and Rajaraj-- with the carcass of two palm civet cats which they intended to sell. All three have been booked under relevant sections of the Wildlife Protection Act and sent to jail."

Last month, four poachers were arrested with the carcass of a cheetal. All the accused were habitual offenders and had been arrested in the past as well.

The palm civet cat is a protected animal.

(The above story first appeared on LatestLY on Aug 02, 2021 03:49 PM IST. For more news and updates on politics, world, sports, entertainment and lifestyle, log on to our website latestly.com).