Bahujan Samaj Party President Mayawati, on Friday slammed Samajwadi Party saying that the party's working style and anti-Dalit ideology had forced it to ally with smaller parties in Uttar Pradesh. 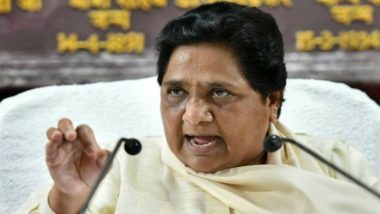 Mayawati's series of tweets comes a day after Akhilesh Yadav indicated that the Samajwadi Party would tie-up with smaller political parties in the Uttar Pradesh Assembly elections.  Akhilesh Yadav, 20 Samajwadi Party Workers Named in FIR in Connection With Assault on Journalists During Press Meet in Moradabad

Mayawati described the Samajwadi Party as 'helpless,' and said that its anti-Dalit approach had made all major parties stay away from it.

'The Samajwadi Party is left with no option but to go with smaller parties and this reflects its helplessness now," she said.

Mayawati has been rather vocal in attacking the Samajwadi Party after its rebel legislators started hobnobbing with SP president.

Akhilesh Yadav, meanwhile, has so far abstained from directly attacking the BSP and its president.

(The above story first appeared on LatestLY on Jul 02, 2021 02:21 PM IST. For more news and updates on politics, world, sports, entertainment and lifestyle, log on to our website latestly.com).