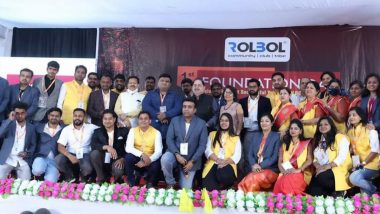 With the umpteen numbers of changes that the world is seeing right now; it is no longer surprising if newer ventures, newer businesses, newer industries, and even newer cities originate. All of this only shows the growth and development of a country and the world as a whole, which is opening up many doors of opportunities for people to come forward and do their bit. Darshan Sankhala, one of the leading most entrepreneurs of India, needs no introduction. He is the man behind the ever-so-famous motivational revolution in the form of Rest Of Life - Best Of Life, aka ROL BOL. This initiative in itself has proved to be so powerful and influential that it has only gone ahead in impacting people's lives for the better.

ROL BOL is a wide empire that includes various verticals like ROL BOL Skills, ROL BOL Talks and ROL BOL Clubs. The ROL BOL Communities have been reaching different parts of the country and are reshaping people's mindsets to the next level. ROL BOL and its head honcho Darshan Sankhala always remain in the headlines, impressing people with the initiatives they undertake. The ROL BOL Community now reaches the new city of Chhattisgarh, Mahasamund, the inauguration of which was done at ROL BOL's First Foundation Day, which was a grand event. Mrs Renuka Singh, Central Minister, helped them take the oath at the new city and Cabinet Minister Vinod Chandrakar; MLA Mahasamund also attended the event. Speakers were Priyank Patel, founder of Nukkad Café, Chitrasen Sahu, para mountaineer, Nitin Srivastava corporate trainer and poet Manoj Shukla. Dr Hathi of the popular serial Taarak Mehta Ka Ooltah Chashmah, Nirmal Soni also was in attendance.

The First Foundation Day of ROL BOL saw Blood Donation Camp in Association with Indian Red Cross Society, for which a special mention goes to Sudeep Shrivastava, the Coordinator and State Consultant, Indian Red Cross Society. 71 units of blood got donated through the camp. They also did free checkup joining hands with Dave's Multispeciality Dental Care, where special mention goes to Dr Sarvesh Dave. 81 people were treated for free in OPD in just three hours.

The ROL BOL Community including the head honcho Darshan Sankhala, Gagan Baradia, Amber Sharma and Viren Nagwanshi also graced the event. Darshan Sankhala is a man of substance. Apart from being a talented businessman, he is also a filmmaker, motivational speaker, host, reiki expert, certified sound healer, producer, traveller and a leader in all aspects. He is currently producing a film for Zee5 and the audiences can't contain their excitement for the same.