Doja Cat leaves no stones unturned when it comes to fashion. The singer's latest look definitely turned heads at the Schiaparelli Haute Couture show covered in blood red paint and covered entirely in 30,000 Swarovski crystals. She also accessorised with a dramatic wrap and giant gem earrings in the same scarlet shade. 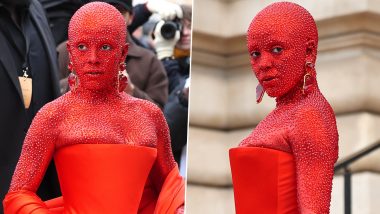 Singer Doja Cat turned heads with her all-red look while attending the Paris Fashion Week event. The Grammy Award-winner was barely recognisable as she covered her body in red paint and over 30,000 blood-red Swarovski crystals for the Schiaparelli Haute Couture show, reports aceshowbiz.com. She amped up the effect by wearing a red strapless Schiaparelli Haute Couture dress with a beaded skirt, which she paired with knee-high boots. American Singer Doja Cat Made Heads Turn With Her All-Red Sparkling Look at Paris Fashion Week; Covered Herself With 30,000 Swarovski Crystals.

In an Instagram post, Pat gushed about working with the "Kiss Me More" songstress to create the "magical" look. "Such a pleasure working with the gorgeous @DojaCat and the amazing @DanielRoseberry on the 'Doja's Inferno' look for @Schiaparelli's FW23 Haute Couture collection," he wrote. He continued: "Doja's sublime patience during the 4 hours and 58 minutes it took to create the look with #TeamPatMcGrath, which was covered in over 30,000 hand-applied @swarovski Crystals, was inspiring." Doja Cat Says She Would Like To Try Her Hand at Acting, Adds 'I’d Love To Be in Movies'.

"The final product was a magical, mesmerising masterpiece of sparkling brilliance. Xx." Doja, however, wasn't the only standout at the fashion show. Kylie Jenner also made a jaw-dropping appearance as she wore a black gown affixed with a large, lifelike lion head, a likely nod to her Leo star sign. The faux animal head was made from "hand-sculpted foam" as well as "wool and silk faux fur", and was "hand painted to look as life-like as possible, celebrating the glory of the natural world", Schiaparelli explained on Instagram.

(The above story first appeared on LatestLY on Jan 24, 2023 12:27 PM IST. For more news and updates on politics, world, sports, entertainment and lifestyle, log on to our website latestly.com).