She is seen wearing a blue coloured bikini that shows off her perfectly toned body in these pictures. In one of the photo, Erica can be seen splashing water on her face. 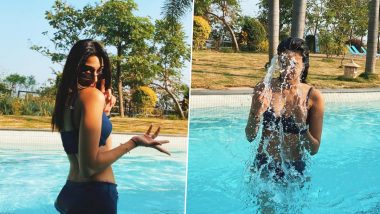 Erica Fernandes has had quite a busy time with back to back projects in her kitty. The actress finally decided to take some time off and enjoy some idle time. The actress drove down a resort near Mumbai to relax for a few days and has been treating her fans with gorgeous pictures from her stay. Today, the actress spent some time in the pool and make sure she does it in style. She stepped into the water in a bikini and shared sizzling photos in it on social media. Erica Fernandes’s Scorching Hot Look in Hip-High Slit Gown Will Make You Sweat Even in Chilly Winters.

Erica shared a number of photos for her fans to see. She is seen wearing a blue coloured bikini that shows off her perfectly toned body in these pictures. In one of the photo, Erica can be seen splashing water on her face while in the other photo, she is seen posing in a sexy pose with her face facing the sun. In another photo, she can be seen sitting by the pool and striking some amazing poses. A goofy picture also made it to Erica's Instagram where she is seen making funny faces. From the pictures, it is very clear that the actress is having a fun time.

Post wrapping up Kasautii Zindagii Kay, the actress decided to focus on some me-time. She even became the owner of a new house and shared a glimpse of her new abode with her fans. While she may longer be working on Kasautii Zindagi Kay, she is quite close to her co-stars. She was recently seen hanging out with Sonyaa Ayodhya and Shubhaavi Choksey. Sonyaa played Mr. Bajaj’s love interest on the show while Shubhaavi essayed her on-screen mother-in-law. Erica Fernandes Dons a Stylish New Haircut and Her New Look Is Just Wow!

Erica is currently not doing any daily soap. In her last television serial, Ekta Kapoor’s Kasautii Zindagii Kay, Erica played the role of Prerna Sharma. However, the actress is busy exploring new platforms as she did by featuring in a well-received music single, “Juda Kar Diya” opposite Bepannah fame Harshad Chopda. She was also seen in the song Maula alongside Sushmita Sen's boyfriend Rohman Shhawl.

(The above story first appeared on LatestLY on Jan 25, 2021 10:13 PM IST. For more news and updates on politics, world, sports, entertainment and lifestyle, log on to our website latestly.com).