The Raabta actor ornamented her sexy look with a sumptuous pair of golden rings and dark nail paint. We did a little digging and got to know what price the dress was available for. 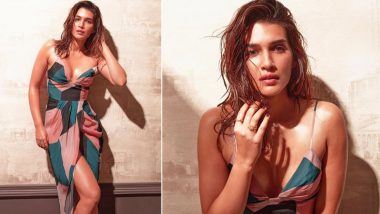 Kriti Sanon is one of the most stylish actresses in B-Town. Be it her red carpet looks or her promotional wardrobe, the actress always manages to stun her fans with her sartorial choices. She is all about bright colours, plunging necklines, slit dresses and regals looks and now since summers have kicked in, the actress is flaunting her sexy summer wardrobe on social media. The actress has shared a new picture is a dress that is looking gorgeous on her. Fashion Faceoff! Kriti Sanon vs Tara Sutaria, Who Looks Sizzling Hot in Manish Malhotra’s Nine-Yard?

Kriti posted a picture in a geometrical patterned, crepe maxi dress from Prreeti Jaiin Nainutia's collection. The dress was painted in hues of pink, black and teal colour and looked gorgeous son the actress. She opted for the wet beachy waves hair look with the dress and kept her makeup to the minimal. The picture went viral in no time and received massive love from her fans. Amitabh Bachchan also dropped a comment saying, "Wow," on Kriti' post.

The Raabta actor ornamented her sexy look with a sumptuous pair of golden rings and dark nail paint. We did a little digging and got to know what price the dress was available for. The dress is priced at ₹12,800, which is a decent price for such a stunning dress.  Kriti's sexy Instagram post received around 12 lakh likes within a few hours of its upload.

Workwise, Kriti recently wrapped up the shoot of her film, Bachchan Pandey. The film stars Akshay Kumar, Arshad Warsi, Jacqueline Fernandez alongside Sanon where we will reportedly see Akshay essaying the role of a dacoit. Kriti will essay the role of a journalist with a secret desire to turn a film director. Her character in the film is called Myra. Bachchan Pandey: Arshad Warsi, Kriti Sanon Wrap Up the Shoot for Akshay Kumar's film.

The actress has now started shooting for Bhediya alongside Varun Dhawan. She will also be seen in Ganpath and Adipurush, the new Bollywood interpretation of the Ramayan. The actress will play Sita in Adipurush. She also has Mimi in her kitty.

(The above story first appeared on LatestLY on Mar 27, 2021 11:21 AM IST. For more news and updates on politics, world, sports, entertainment and lifestyle, log on to our website latestly.com).