Manushi Chhillar Has Her Sequins, Shine and a Retro Heart Vibe in Sync!

Manushi has given us a subtle masterclass in blending homegrown brands with luxe international ones to slay varied chapters of style. Adding to this is a versatility to look stunning in any kind of style renders her as a worthy designer and stylist muse. For a photoshoot, she teamed up with fashion stylist Ami Patel pulling off a retro-chic vibe. 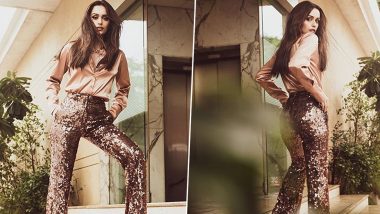 She was crowned Miss World 2017 and made us prouder than ever. A millennial who seems to have hung up the MBBS medico boots to pursue a career in Bollywood, Maushi Chhillar is a certified style cynosure. A heady Instagram following of 6 million is a worthy testimony to her fame. Her petite, toned frame, dimpled smile, lustrous long locks and a charming persona are perfectly in sync with a strong style sense, courtesy her Beauty With A Purpose tour with Miss World 2017 continental winners all through 2018. Also, a trained Kuchipudi dancer, Manushi's much-awaited silver screen debut is with the period drama, Prithviraj opposite Akshay Kumar. Manushi has given us a subtle masterclass in blending homegrown brands with luxe international ones to slay high-street, red carpet and travel styles. Adding to this is an unmissable versatility to look stunning in any kind of style renders her as the worthy designer and stylist muse. For a photoshoot she teamed up with ace fashion stylist Ami Patel and pulled off a retro-chic vibe.

The photoshoot was lensed by Signe Vilstrup with glam helmed by makeup artist Namrata Soni. Here is a closer look. Happy Birthday Manushi Chillar: 8 Fascinating Facts About the Former Miss World That You May Not Have Known.

A beige toned satin shirt was tucked into a pair of sequinned pants by Dhruv Kapoor. Sleek straight from the top, textured wavy hair at the end was coupled with a flawlessly done up face featuring nude brown lips and defined eyebrows. A pair of metallic stilettos sealed the deal. Prithviraj: First Look of Manushi Chillar As Princess Sanyogita Out in Akshay Kumar’s Period Drama.

Prithviraj, an upcoming historical action drama film directed by Chandraprakash Dwivedi and produced by Aditya Chopra under his production house Yash Raj Films narrates the life of Chauhan king Prithviraj Chauhan essayed by Akshay Kumar while Manushi Chhillar essays the role of his wife Samyukta. The film was officially announced on 9 September 2019, which marked the occasion of Kumar's 52nd birthday.

(The above story first appeared on LatestLY on Sep 02, 2020 03:00 PM IST. For more news and updates on politics, world, sports, entertainment and lifestyle, log on to our website latestly.com).