While the world is waiting for an official announcement from Shah Rukh Khan about his next project, the actor attended a Hero MotoCorp event on January 21 in Delhi and looked suave and sharp. Check out the superstars' pics below. 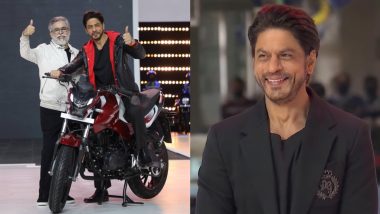 While the world is waiting for an official announcement from Shah Rukh Khan about his next project? The superstar is in no mood to reveal the secret as of now. Having said that, SRK attended a Hero MotoCorp event on January 21,  2021, in Delhi and the internet is in love with the actor. Fans are going gaga over the glimpse of the Badshah of Bollywood. The star was present at the event to unveil the new six bike models from the company. Hero has attained the tag of being one of the fastest to attain a 10 crore cumulative production mark, and so SRK was called to launch the new two-wheelers. Shah Rukh Khan's Look For Pathan Leaks! Pics Of SRK In Long Hair Will Get You Excited About The Film.

Apart from acting, Shah Rukh Khan is also known for his cute dimples and subtle fashion and guess what he flaunted both at the venue. For the day, Shah Rukh was seen opting for a Don kinda look as he was seen wearing a dark tee which he paired with a coat and greyish pants. Further, he added charm to his overall getup by donning glares. All in all, he looked fab as always. King Khan also was seen posing on a motorbike at the event. Shah Rukh Khan Says, ‘See You All On The Big Screen In 2021’! Fans Think SRK Is Hinting About Pathan (Watch Video).

What do you think about SRK's style at the event? Was it yay or nay? Earlier, on the New Year's Day, SRK had wished fans via a video and also said that he will see one and all on the big screen in 2021. With this, his admirers had started speculating that he is talking about Pathan, which stars Deepika Padukone and John Abraham in key roles. Stay tuned!

(The above story first appeared on LatestLY on Jan 21, 2021 04:45 PM IST. For more news and updates on politics, world, sports, entertainment and lifestyle, log on to our website latestly.com).