In popular culture, Basant Panchami is dedicated to the goddess of knowledge, arts and music, Saraswati and is marked by special prayers to Her in North India. 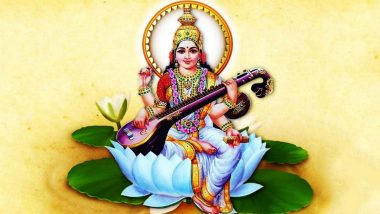 In popular culture, Basant Panchami is dedicated to the goddess of knowledge, arts and music, Saraswati and is marked by special prayers to Her in North India. In certain parts of India, people also worship the God of Love, Kamadeva on this day. Interestingly, the day also heralds the arrival of Spring. Basant Panchami also marks the start of preparation for Holika and Holi, which occurs 40 days later. Basant Panchami 2019 Date and Significance: Saraswati Puja Tithi Timings, Mantra and Story Attached to the Hindu Spring Festival.

Nityananda Misra, a well-known Sanskrit scholar and author of the recently released book ‘Kumbha: The Traditionally Modern Mela’, however, reminds us of a few lesser known facts of Basant Panchami, which is celebrated on the fifth day of the bright half of the ‘Magha’ lunar month and marks the onset of spring. Saraswati Vandana Mantra Video With Lyrics on Basant Panchami 2019: Recite This Devotional Song for Art, Knowledge and Wisdom.

Misra says, “Basant Panchami is one of the many festivals (others include Kamotsava/Madanotsava and Holi) that have been celebrated in India for a long time as part of ‘Vasantotsava’ (“festival of spring”).” As per Misra, one of the earliest textual references to the ‘Vasantotsava’ celebrations is in the ‘Taittiriya Aranyaka’ (dated first millennium BCE by some historians) in which a passage (1.3.5) mentions that spring is ‘jaradaksha’, meaning “skilled in water”. Basant Panchami Images & Saraswati Puja HD Wallpapers for Free Download Online: Wish Happy Vasant Panchami 2019 With WhatsApp Sticker Messages and GIF Greetings.

He points out that Bhatta Bhaskara and Sayana have commented on this passage that during spring, people are fond of water and the clothes of the gods are coloured by agents like turmeric powder. These references show the association of spring season with both Holi and yellow colour (the colour of Basant Panchami). According to the author, in Sanskrit literature, the onset of spring is associated with nature coming alive: flowers blooming, bumblebees buzzing, and animals mating.

“In both poetry and prose, writers have reserved their best for the spring season. In the ‘Ritusamhara’ (“The Collection of Seasons”), the poet Kalidasa (4th century CE) begins the sixth and last canto with a beautiful description of the onset of Vasanta,” Misra says, translating the verse (6.1):“O dear, the warrior Vasanta has arrived to pierce the hearts of lovers. The blooming mango flowers are his sharp arrows and the garland (swarm) of bumblebees is his shining bowstring.”

In a passage in Banabhatta’s prose-poem ‘Kadambari’ (“The Liquour”), the heroine beautifully describes how the slow arrival of Vasanta parallels the arrival of her youth. Misra translates, “And, gradually, fresh youth appeared in my body—as the ‘Chaitra’ month in ‘Vasanta’ (the spring), as a new sprout in the ‘Chaitra’ month, as a flower in the new sprout, as a bumblebee in the flower, and as excitement intoxication in the bumblebee.”Misra says that the festival of ‘Basant Panchami’ is referred to as ‘Shri Panchami’ in Sanskrit texts and historically, it was Lakshmi (also called ‘Shri’) and not Saraswati who was worshipped on this date.

The author points to the ‘Varshakriyakaumudi’ (“The Moonlight of Annual Ceremonies”) of Govindananda (16th century Bengali scholar) which mentions the name ‘Shri Panchami’ of the festival and cites a verse from the ‘Brahma Purana’ which goes, “On the wish-granting fourth date of the bright half of Magha, Parvati is worshipped. And on the fifth date, Shri (Lakshmi) bestows incomparable fortune and prosperity.”

The author adds that Govindananda specifically mentions that the worship of Saraswati and abstinence from studies is ‘gaudachara’, “a practice prevalent in Gauda (modern Bengal region)”.Finally, Misra reminds us that ‘Vasanta Panchami’ is the fourth of the six major ‘snana’ (bath) days at the Magh Mela, Ardha Kumbha Mela, and Kumbh Mela in Prayag.

Interestingly, there are quite a few myths associated with the festival. According to popular beliefs, goddess of knowledge, art, music and science, Saraswati was born on this day and people worship her to achieve wisdom. Popular folklore goes that poet Kalidasa, before attaining knowledge was a simpleton who was tricked into marrying a princess who did not respect him. A dejected Kalidasa tried to commit suicide but the goddess Saraswati appeared before him and asked him to take a dip in the river. On doing what he had been asked to do, he emerged from the water an intelligent, knowledgeable and cultured person, who would eventually become a renowned poet. It is believed that the goddess is worshipped on this day so that she may bestow similar gifts on her devotees.

Another story related to Kamadeva goes that after the god of love was turned to ashes by Lord Shiva for his misdeeds, his wife Rati went through an arduous 40 days of penance to bring her husband back. On the day of Basant Panchami, Shiva finally relented and brought Kamadeva back to life. Which is why Kamadeva, the god of love and desire, is worshipped along with his wife Rati on this day.

Another historically placed legend is that the observation of the festival started with the arrival of the Aryans. It is believed that the Aryans travelled through Khyber Pass and crossed the Saraswati River to reach India. When they settled in, the Saraswati River became an important source of life for them, so the celebration became a routine. Muslims too have been celebrating Basant since 12th century AD. Legends say that after Delhi's Chishti Saint Nizamuddin Aulia's young nephew Taqiuddin Nooh died, he was so stricken with grief that he withdrew from society.

The court poet Amir Khusrau, tried thinking of ways to brighten the Saint’s mood. Upon seeing local women carrying flowers on Basant and dressed in yellow, Khusrau too dressed in yellow and took flowers to the Saint. This brought a smile on the Saint's face. Since then, Basant has been celebrated at the dargah of Nizamuddin Aulia in Delhi and all dargah's of the Chishti order.