Embrace the trees and Save them from being felled; The property of our hills, Save them from being looted. Let us remember the all-important movement carried out a grassroots level through these words from a poem by Ghanasyam Raturi, an Indian poet writing about the Chipko movement. 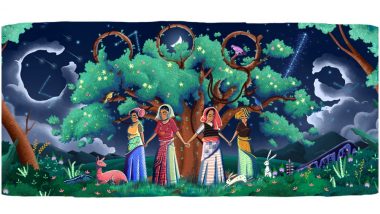 We have grown up reading about the landmark forest conservation movement in India, the Chipko Movement also called Chipko Andolan. The Monday of March 26, 2018, marks the 45th anniversary of the Chipko Movement. Understanding the significance of the historical event, search engine giant Google is honouring the day with a contemplative doodle. A day after presenting its Indian users with a Google doodle on veteran Bollywood actor Farooq Sheikh, the internet service provider has struck countrymen’s chords with a colourful Chipko Movement Google Doodle. The design shows a group of women standing around a tree, representing their fight against deforestation!

The word “Chipko” means that “to stick” or “to hug”. The movement got its name from the word ‘embrace or hug’ and that’s what hundreds of nature lovers did in order to save the trees from being illegally chopped down. Though the Chipko type movement goes all the way back to 1730 AD when a local Bishnoi woman named Amrita Devi led the protests against illegal felling of trees. 363 villagers in Rajasthan’s Khejarli village laid down their lives to save Khejri trees, the particular Chipko Andolan is about the movement in the 1970s.

Who started the Chipko Movement?

The first Chipko Movement was definitely initiated by Amrita Devi Bishnoi and it was again bought into picture in the 70s by Sunderlal Bahuguna, a renowned environmentalist. He took the initiative to protect the beautiful regional forests in Uttar Pradesh (Uttrakhand). Chipko Andolan began to preserve the nature from being mercilessly destroyed on accounts of dam construction, setting up of factories or roads. One failed to see the aftermath of the mindless illegal felling of trees and wiping out of forests turning the Himalayan mountain range into barren lands. Bahuguna took it upon himself to save the nature from irreparable damage. The man was joined by several groups of like-minded volunteers who got together to begin a non-violent movement against illegal cutting down of trees.

Sunderlal Bahuguna coined the Chipko slogan, “Ecology is permanent economy”. He guided the villagers and volunteers to cling to trees and save them from axes. He along with some of the noted activists of Chipko Andolan Dhoom Singh Negi, Bachni Devi, Chandi Prasad Bhatt adopted the Gandhian path of non-violence to save the nature and succeeded in getting a ban on green felling in the Himalayan forests by then Prime Minister Indira Gandhi.

Coming to the beautiful, thought-provoking doodle made in honour of Chipko Movement by Google. It is rich in colour, with all elements of nature present in it. The middle section of doodle contains a large tree, which is surrounded by a group of four women dressed in traditional attire. It is illustrated by Svabhu Kohli and Viplov Singh, who are celebrating the bravery and perseverance of all of the ecological protectors across the globe, and thanks them for their endeavors.

Embrace the trees and Save them from being felled; The property of our hills, Save them from being looted. Let us remember the all-important movement carried out a grassroots level through these words from a poem by Ghanasyam Raturi, an Indian poet writing about the Chipko movement.

(The above story first appeared on LatestLY on Mar 26, 2018 01:01 AM IST. For more news and updates on politics, world, sports, entertainment and lifestyle, log on to our website latestly.com).